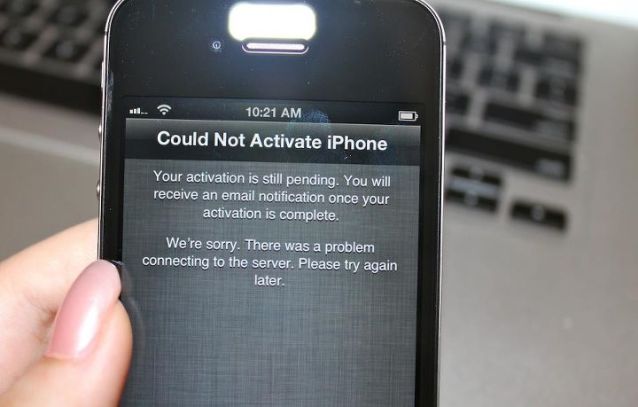 Almost like clockwork, AT&T’s iPhone activation servers have crumbled under the onslaught of eager new owners, just as they have for every iPhone launch. Meanwhile, iPhone 4S activations on Sprint and Verizon seem to be moving along swimmingly.

Many new AT&T iPhone 4S owners (this reporter included) faced the above activation error screen several times before their phones were able to successfully activate. Instead of just failing completely, iPhone 4S owners are placed in an activation queue when they receive the error and are notified by email when it’s complete. (Ever the eager gadget geek, I spent an hour restarting the activation process before it finally took.)

I first noticed traces of AT&T’s annual activation woes this morning on Twitter. MSNBC tech reporter Rosa Golijan posted the above picture with a Vader-esque “Noooooooo!” and it wasn’t too hard to find other annoyed iPhone 4S owners by searching for “iPhone activation” on Twitter. I’ve also talked to several iPhone 4S owners who have been in activation limbo for hours now.

You’d think that AT&T would have prepared its servers for this particular launch, since it’s the first time it has to compete directly with other carriers. Now AT&T’s activation issues stand out all the more. Then again, the delays could be worse — back in 2009, it took some iPhone 3GS owners up to two days to activate.

Thanks to iOS 5, this year also marks the first time the iPhone can activate itself sans computer. Previously, you had to connect your new iPhone to iTunes to activate it properly. Being able to self-activate will be particularly useful for the iPad, which some computer-less consumers have had trouble activating at home.

Neither Apple nor AT&T were immediately available for comment. I’ll update when I hear back.

How has your iPhone activation experience been? Let us know in the comments!