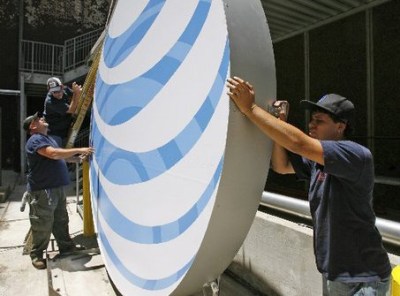 In addition to confirming that AT&T is working on shared data plans, CEO Ralph de la Vega spent much of his time on stage at the D9 conference today justifying the carrier’s potential merger with T-Mobile.

We already knew that the merger would improve network access for both AT&T and T-Mobile users, but de la Vega offered up a specific figure that was sort of mind-boggling. The combined networks would be equal to five to ten years of improvements for AT&T and T-Mobile individually in dense cities like San Francisco and New York City, he said.

If true, that would definitely answer the question of how the merger would be in the public interest. All Things Digital’s Walt Mossberg opened up his interview with de la Vega by asking “Why’s it good for consumers if AT&T swallows up T-Mobile?” — and it’s also something that federal regulators are surely asking themselves.

Mossberg went on to ask, “Why should we believe that AT&T is competent to manage what will become America’s largest carrier, when you’re consistently rated as providing the worst service? Please don’t take this personally!” De la Vega emphasized that AT&T has been steadily improving its network in NYC and SF over the past few years. He said that AT&T has devoted 40 megahertz of spectrum to its HSPA network (which the iPhone relies on) in New York City, and it’s currently working on adding another 10Mhz. He also noted that 40Mhz of spectrum is the equivalent to what four typical carriers would offer.

When it was pointed out that AT&T is lagging behind Verizon’s LTE 4G deployment severely (AT&T will only launch LTE in five cities this summer, while Verizon launched in 35 cities last December), de la Vega said he suspected the two carriers would be on par when it comes to LTE penetration in “two to three years.” Verizon has previously said that it expects to have nationwide LTE coverage by the end of 2013, so AT&T certainly has some catching up to do.