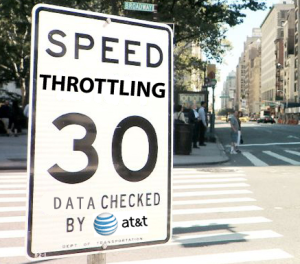 In early October, AT&T may implement a new policy of throttling bandwidth for customers who have unlimited data plans, reports 9 to 5 Mac. The policy change would coincide with the the rumored launch date for the iPhone 5.

AT&T claims data throttling is necessary to solve congestion and poor network performance issues caused by its customers who use its data networks the most, according to the report. Yet this particular problem has plagued the carrier since the iPhone launched on its network in 2007.

But after four years of improvements to its existing 3G network as well as building a new 4G/LTE network, you would think that AT&T could handle more intensive data usage —  especially since the number of people still eligible for the unlimited plan is only going to decrease.

It’s just as likely that the carrier is struggling to maintain a viable wireless network because of the growing number of customers using smartphones to access data intensive services like Netflix, Pandora and Spotify.

AT&T isn’t the only carrier implementing policy changes aimed at improving the stability of its network. Both Verizon and Virgin Mobile are planning to throttle network speeds of data-hogging customers.

AT&T’s practice of throttling will probably be similar to the process used by other carriers. Data hogs will experience slower network speeds for an entire billing cycle after they reach a certain threshold of data. Network speeds for those customers will return to normal at the beginning of the following billing cycle.

If AT&T’s data overage threshold is a gigabyte or more, most people probably won’t experience throttling. But that could change if the data threshold is much lower (say, 200 mb).

Will new data throttling policies affect the way you currently use your smartphone? Let us know in the comment section.