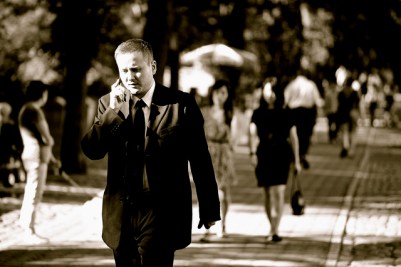 Tired of carrying multiple mobile devices just to appease your job’s IT department? With AT&T Toggle, you’ll soon be able to use your personal Android phone and tablet to access work data.

Announced today at the CTIA conference in San Diego, AT&T Toggle allows your Android devices to securely separate work email, calendars, apps and more. Best of all, the platform isn’t just limited to AT&T devices — the company says Toggle will work across any mobile carrier.

Toggle, which is powered by technology from Enterproid, gives IT administrators a web portal for managing employee access to resources, as well as adding, updating, and deleting business apps. Once an employee leaves the company, or if a device gets lost, IT admins will be able to wipe devices of confidential data easily.

“This is absolutely of interest to enterprises,” said Jack Gold, the founder and principal analyst at J. Gold Associates. “The single biggest challenge enterprises face in the bring-your-own-device era is how to protect the corporate assets – its data. There are more heavy handed approaches (like Good that builds a unique, and different UI environment) but that is not what users want. With this approach, companies get the needed separation of what’s allowed when users are interacting with the corporate apps and data (so they can’t copy and paste to an non secure area or Gmail, for example) and the company doesn’t have to worry about managing the end user side of things, letting the users load anything they want and knowing organizational stuff is protected”

Toggle also shows how new ideas within AT&T can quickly become a reality. In a blog post today, AT&T Chief Technology Officer John Donovan said Toggle started out as a post from one employee on the company’s Innovation Pipeline crowdsourcing engine. From there, the idea evolved and eventually got funding and business support. The company tapped a developer to create Toggle through its Fast Pitch program, and a team at AT&T’s Foundry pushed it forward from concept to reality. In the end, AT&T was able to announce Toggle only a few months after it was conceived.

AT&T Toggle works on devices running Android 2.2 and higher. The company says it’s expected to debut before the end of the year.