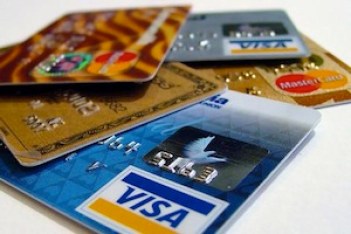 Soon you’ll be able to make purchases in the U.S. by waving your smartphone, if AT&T, Verizon, and T-Mobile have their way. The carriers are partnering for a joint venture that will aim to displace credit and debit cards, sources familiar with the matter tell Bloomberg.

According to the sources, the carriers may work with Discover Financial Services and Barclays to develop a smartphone payment system in Atlanta and three other cities. They’ve also been seeking out a CEO to spearhead the venture.

The effort would compete directly with the likes of Visa and Mastercard, which together currently handle 82 percent ($2.45 trillion) of consumer spending on cards, according to the industry newsletter Nilson Report. The venture would be a boon to Discover’s payment network — which is currently ranked fourth in the U.S. Barclays would be the bank helping to manage the accounts.

The sources also say that AT&T and Verizon, the two biggest carriers in the country, are equal partners in the venture, while T-Mobile has a smaller stake.

While it would be something new in the U.S., similar phone-based purchasing systems already exist in Japan, the U.K., and Germany.

Not surprisingly, the companies involved aren’t saying much about the venture. AT&T’s Mark Siegel said that “mobile payments are the logical next step for consumers”, but then went on to say — along with Pete Dobrow of T-Mobile — that there was nothing to announce. Kevin Sullivan of Barclays said “facilitating mobile payments is a big part of Barclaycard’s strategy globally.”

Retailers may find the phone-based solution a savior from the interchange fees (also known as “swipe” fees) that card companies charge on debit and credit transactions. Said fees usually amount to 1 to 2 percent of every transaction, and end up exceeding $40 billion a year. There aren’t any details about the fees that the phone payment venture will charge, but it’s very likely that they will be much lower than typical interchange fees in an attempt to woo retailers.

Mastercard and Visa have been seeking out mobile payment solutions of their own for some time. Visa, together with contactless-payment company DeviceFidelity, recently unveiled its In2Pay iPhone case that turns the device into a credit card with support for no-swipe payments. Mastercard took a different approach by developing contactless-payment stickers together with Citigroup.

The new venture would compete with mobile payment startups like Boku, Zong, and Square, although none of them aim to do credit card-like payments without swiping.