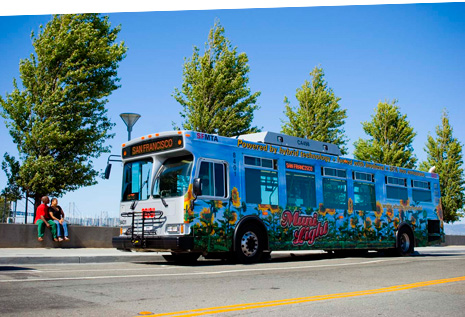 British iPhone application developer Acrossair is launching an augmented reality transit-finding app for San Francisco as soon as Apple releases a newer version of its iPhone OS in early September. Augmented reality is a nascent field that lets you superimpose graphics or information over a live camera feed, letting you see geotagged Wikipedia entries or videos related to your surroundings, for example.

The app works by letting you pan around with your iPhone 3GS’ viewfinder and then marking nearby transit stops and their distances. (It won’t work on older iPhones.) Acrossair has released similar subway apps for London and New York, but a few intrepid commenters noted that incorporating only subway data isn’t really helpful for San Francisco, since the city’s main lines are concentrated down Market Street. Acrossair added Muni Rail and bus stops to compensate for this.

Augmented reality apps aren’t widely available on the iPhone yet because the operating system lacks a public application programming interface for manipulating live video feeds. (About a dozen start-ups and research hubs petitioned Apple to change this.) There, of course, many other, non-augmented reality iPhone apps that help users navigate public transit, though one called Routesy has faced its own set of challenges.

Acrossair is self-funded with offices in London and Mumbai.