Amazon Web Services (AWS), the biggest public cloud currently available, loves to announce one new service after another during keynotes at its annual re:Invent conference in Las Vegas. This week is no different.

Yikes, that’s a lot of news. In one day today, Amazon made more announcements that it did over two days at last year’s re:Invent. Shaking. My. Head. Damn. But that just shows you how big of an operation AWS is now — the company can enter a bunch of new markets at the same time. Clearly Amazon chief executive Jeff Bezos sees the long-term potential of AWS and has been giving the OK to invest more and more Amazon money into it.

Here’s a roundup of all the news coming out of re:Invent this week.

AWS today announced the launch of QuickSight, a new business intelligence (BI) service based in the Amazon cloud. It’s available in preview now.

It will be available for “a tenth of the cost of traditional business intelligence providers,” AWS senior vice president Andy Jassy said at the AWS re:Invent conference.

Amazon launches Kinesis Firehose, a tool for sending streaming data into the cloud

Amazon introduces Snowball, a 50TB storage server to ship data to the cloud Above: An Amazon Snowball shown at the 2015 AWS re:Invent conference.

AWS today showed off Amazon Snowball, a 45-pound piece of hardware for storing 50TB of data that can be shipped to AWS to be stored in the cloud.

This is a pretty wild thing for AWS to launch, because AWS provides cloud infrastructure and services, not bespoke hardware. It’s what’s distinguished AWS from other enterprise software vendors, including IBM. But so be it — Snowball is actually a pretty interesting idea when you realize AWS just wants to get customer data into the cloud as fast as possible. AWS today announced the launch of new database tools to run production databases on its public cloud. There’s now a Database Migration Service that allows companies to easily move databases to AWS that takes 10 to 15 minutes to set up. The promise here is to run the same databases in the cloud at a lower cost. But databases are complicated pieces of software. To make things simpler, AWS today introduced a free Schema Conversion Tool that automatically changes up schema and database code so that existing databases can work with the ones available on Amazon’s public cloud. 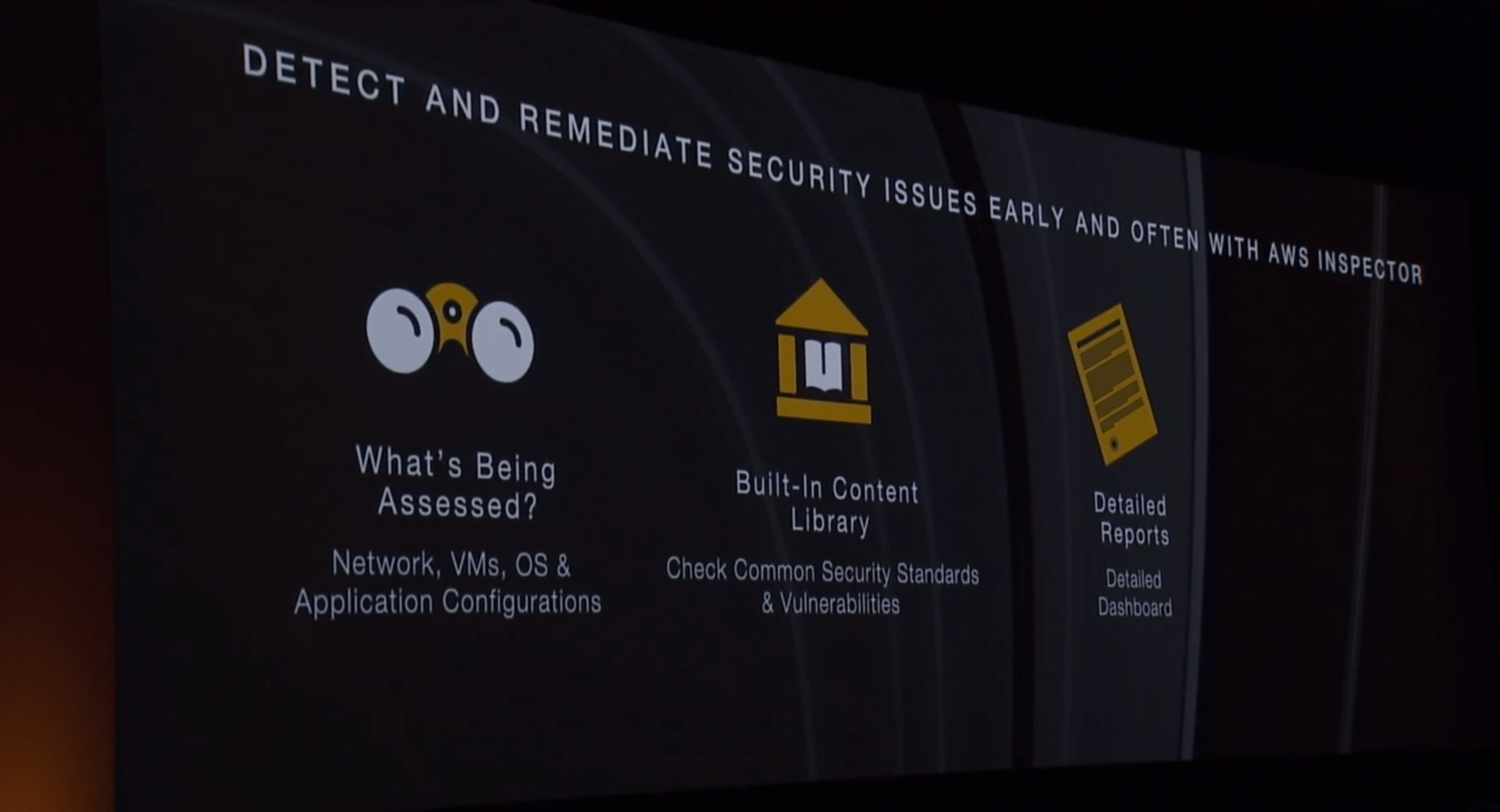 Above: Amazon Web Services introduces the Amazon Inspector service in preview at the AWS re:Invent conference.

AWS today announced Amazon Inspector, a sort of bot service that looks for and identifies potential security and compliance vulnerabilities. The tool is available in preview today.

It draws on the knowledge that Amazon has built up over 20 years of operation, AWS senior vice president Andy Jassy said at the AWS re:Invent conference. The service generates reports on security posture and suggests next steps. “You can tell which assessments were done, what findings they have, and what they actually did to remediate,” Jassy said. 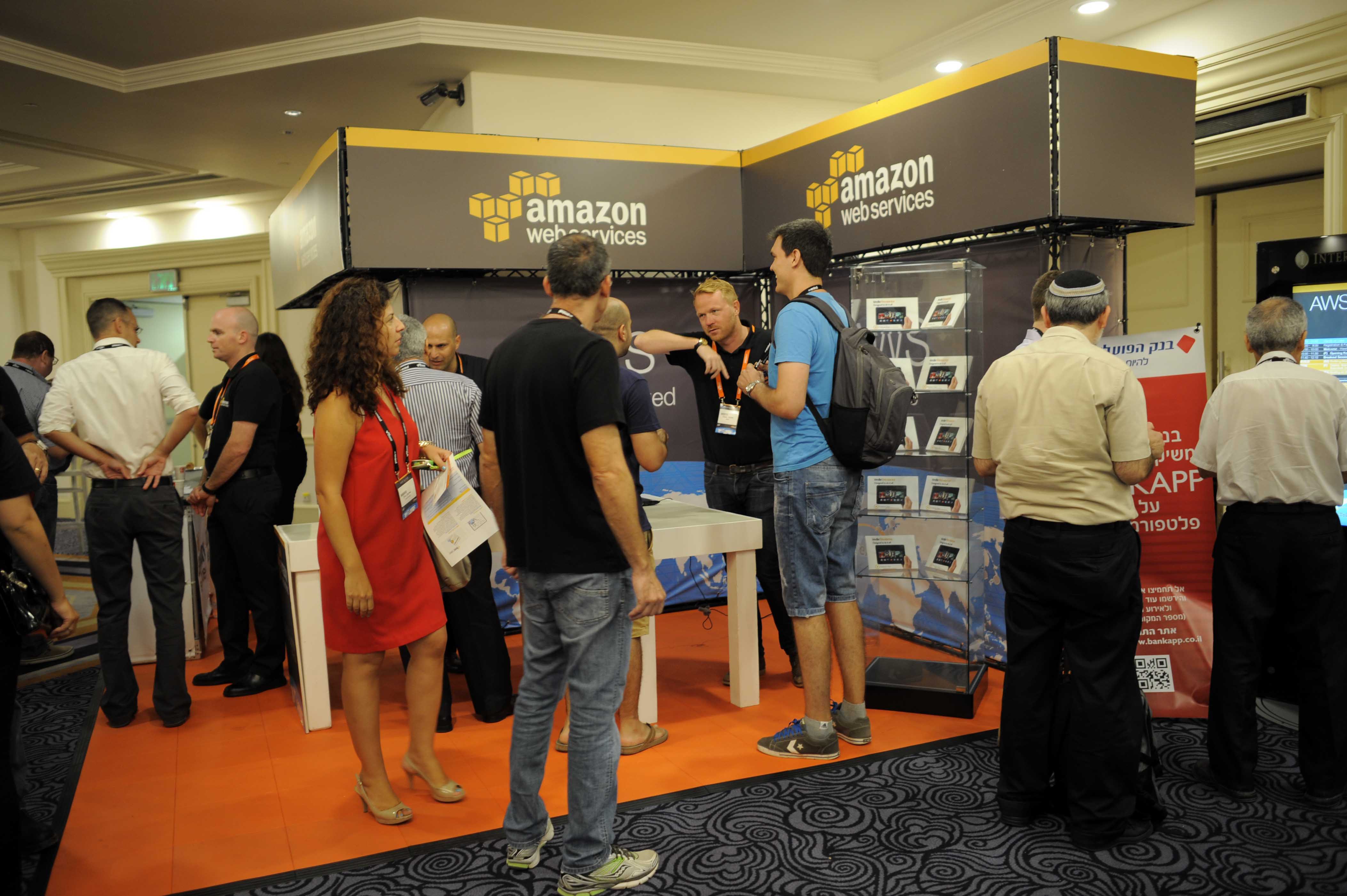 Above: An Amazon Web Services booth at an event.

Amazon Web Services (AWS) today announced the launch of Kinesis Analytics, a new service to do time-series analytics over data that’s streaming in. The tool lets developers execute pre-built SQL statements as well as run their own custom queries.

The service, which works with Kinesis Streams and the new Kinesis Firehose, will become available next year, Amazon chief technology officer Werner Vogels said at the AWS re:Invent conference in Las Vegas. 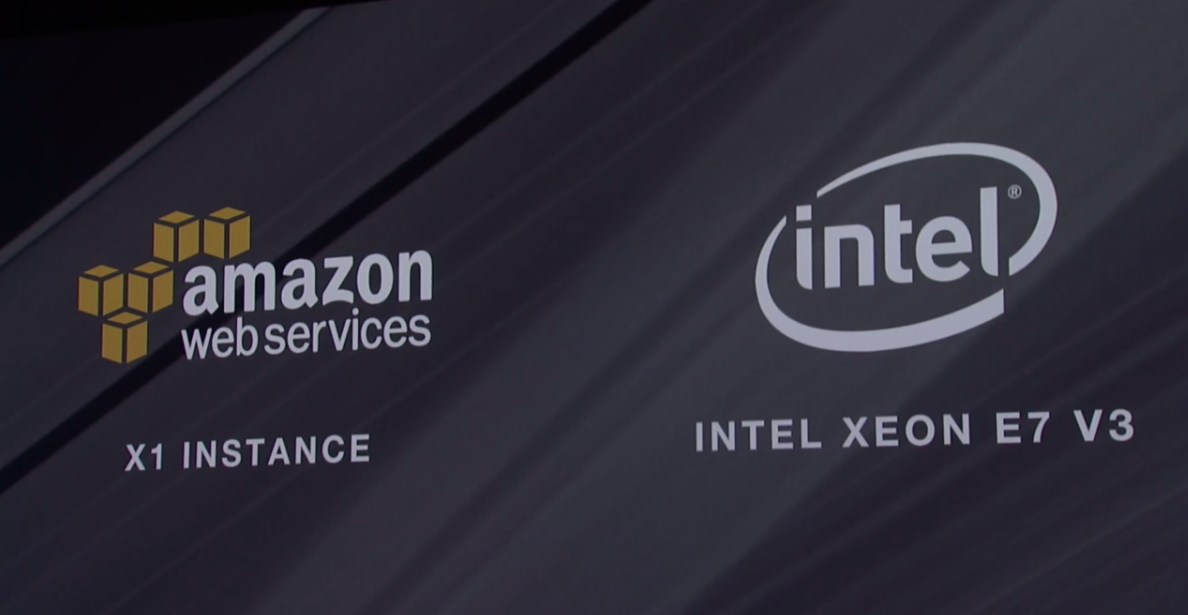 Above: Intel executive Diane Bryant speaks about Intel’s collaboration with Amazon Web Services at the 2015 AWS re:Invent conference in Las Vegas on Oct. 8.

The x1’s use Intel Haswell processors with more than 100 cores available, while the t2.nanos are designed to let developers “burst up,” Amazon chief technology officer Werner Vogels said at the AWS re:Invent conference this morning. The former will arrive in the first half of next year, and the latter will become available later this year.

Above: Amazon CTO Werner announced Python support for Lambda at the AWS re:Invent conference in Las Vegas on Oct. 8.

Other enhancements include support for AWS’ Virtual Private Cloud service, as well as custom retry logic, scheduled functions. But that’s not all. “Now you can run your functions for up to five minutes,” Amazon chief technology officer Werner Vogels announced the news at the AWS re:Invent conference this morning.

Amazon Web Services (AWS) today announced the EC2 Container Registry, a new tool for storing container images for parts of applications. The launch follows Google’s introduction of its Container Registry at the beginning of this year.

The tool is “a fully managed service … where you can launch your container applications from,” Amazon chief technology officer Werner Vogels said today at the AWS re:Invent conference. AWS is also launching a new Service Scheduler to run containers across data centers in AWS’ multiple availability zones, as well as an integration of hot container startup Docker’s Compose open-source software and a new ECS command-line interface (CLI). Amazon Web Services (AWS) today announced the introduction of the >AWS Mobile Hub, a service for building, testing, deploying, and then monitoring iOS and Android apps. The tool is live now in beta, and it’s free in the sense that you only pay for the services that the Mobile Hub uses, including AWS compute and storage services.

Today’s news, announced at the AWS re:Invent conference in Las Vegas, builds on the set of mobile-focused announcements at last year’s re:Invent. But this is a full-fledged mobile backend as a service (MBaaS), not just bespoke mobile analytics, push notifications, identity management, and data synchronization.

Above: Werner Vogels announces Amazon IoT at the AWS re:Invent conference in Las Vegas on Oct. 8.

Amazon Web Services (AWS) today announced Amazon IoT, a new service companies can use to hook up with Internet-connected devices and build applications based on them.

A feature called Device Shadows will “make it easy for you to actually control your devices without having to have the specific knowledge of how to communicate with that device,” Vogels said. Amazon IoT also comes with a device registry, a rules engine, and a publish-subscribe Device Gateway feature that supports the MQTT protocol, AWS executive Matt Wood said during a presentation on the new tool. There are new C and JavaScript software-development kits (SDKs) and an Arduino library to help developers work with the service.