Roughly one-third of eligible voters are not registered to vote, but more than 90 percent of Americans own a mobile phone.

HelloVote is designed to close that gap by using phones to help everyone register to vote for the upcoming election. The bot can register voters in all 50 states, and it takes the average voter 90 seconds to register, the bot’s maker said.

Voters can go to hello.vote, text 384-387, or chat with the HelloVote Facebook Messenger bot.

HelloVote is a project of Fight for the Future, a group that wants to see technology used for good.

“HelloVote takes the registration process right to the voter — instead of the other way around, and may make millennials, immigrants, and communities of color the decisive game-changers in this closely contested election up and down the ballot by leveraging up-to-date technology and social media,” HelloVote said in a statement announcing the bot’s launch today. 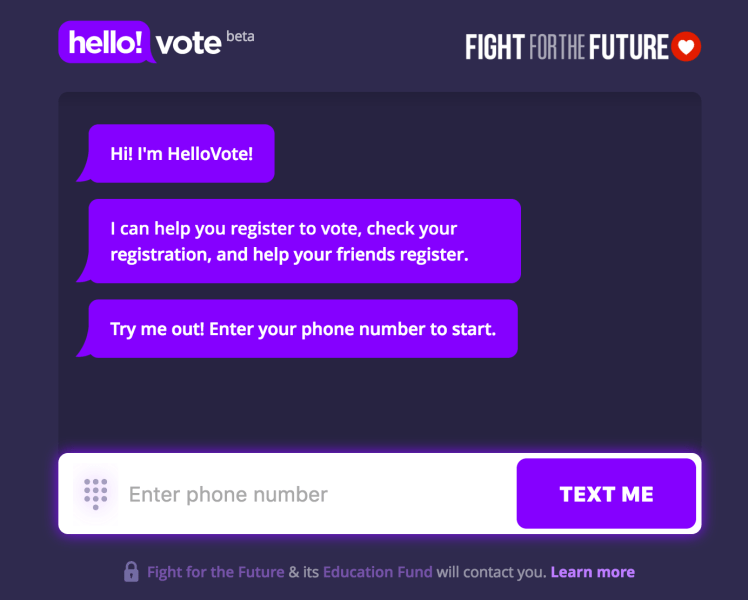 “Democracy depends on participation, and technology has the power to significantly reduce barriers that have traditionally stopped people from voting,” said Twilio VP Patrick Malatack in a statement. “By making it easier for people to sign up from anywhere, on any mobile phone with no internet required, HelloVote has streamlined the voter registration process. We are excited to see more people getting out and voting in 2016 as a result of this valuable service.”

In its announcement, HelloVote highlighted that the bot may be particularly beneficial for underrepresented groups like Latino voters between the ages of 18 and 24, voters without college degrees, voters from poor communities, and others.

HelloVote calls itself a nonpartisan project of Fight for the Future, but virtually every group highlighted as underrepresented (with the exception of those without college degrees) would most likely vote for Hillary Clinton over Donald Trump.

“The way he talks about what a Trump presidency would look like is that it would be closer to a fascist style of leadership,” said Lawson, who joined a group of more than 100 tech leaders signing a letter condemning Trump this summer.

Another bot, BFF Trump, was made to remind millennial voters about the crazy things Donald Trump has said.

HelloVote was created in part by Fight for the Future CTO Jeff Lyon and cofounders Holmes Wilson and Cheng.