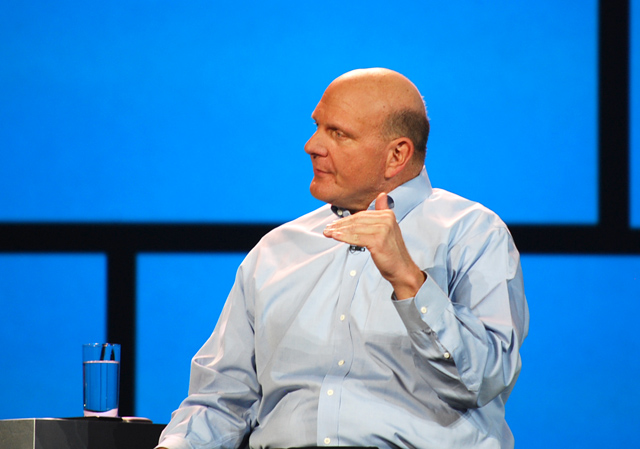 Microsoft CEO Steve Ballmer took to the stage at CES 2012 in Las Vegas, and the first thing on his mind, naturally, was the young Windows Phone 7 operating system.

Earlier on Monday, Ballmer took the stage with Nokia CEO Stephen Elop and AT&T Mobility CEO Ralph de la Vega to promote the upcoming Nokia Lumia 900, which was biggest unkept secret of CES. The Nokia Lumia 900 will be available on AT&T and features a 4.3-inch AMOLED and a 1.4-gigahertz processor.

Ballmer, as expected, stressed that the latest version of Windows Phone was simply better than any other platform. He didn’t mention iOS, Android and BlackBerry, but we all knew what he was talking about.

“We’re excited about where we are,” Ballmer said of Windows Phone. “All these phones do e-mail, social networking, blah, blah, blah. … These phones make a sea of applications. We do it a better way. Windows Phone is the first phone to put people first.”

Ballmer also talked up the Nokia 710 Lumia, which will arrive on T-Mobile in the next week, and the Lumia 800, which arrive unlocked in the Microsoft Store in the near future. Ballmer decided to mention the HTC Titan II on AT&T as well, spotlighting that phone’s 16-megapixel camera.