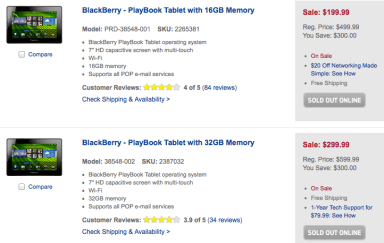 Best Buy sold out of Research in Motion’s PlayBook tablets this Black Friday, leading to speculation that the company was canning the tablet altogether.

Best Buy confirmed to VentureBeat that it is not canceling the PlayBook; it’s just temporarily sold out.

After purchasing PlayBooks for the sale price of $199 on Best Buy’s website, customers reported having credit cards charged, with e-mails following soon after stating Best Buy was not going to deliver the tablet. Some said inventory issues were blamed, but others were given no explanation. While this looked like another bump on RIM’s road to recovery, it could be a positive for the company. After all, having its Best Buy inventory wiped out online and in-store is a sign that people actually want to buy RIM’s tablet.

The mobile company has been losing steam for some time now, amplified by recent outages to its Blackberry service, a push back of updates to its PlayBook operating system and now the steep PlayBook holiday sale price, $300 off the regular price of $499. The company’s second quarter revenue was down ten percent year over year. PlayBook sales topped out at 200,000 shipped units, half of the 400,000 units expected. The price drop seems to have helped the tablet, however, making it more competitive with eReaders on the market, instead of the iPad and its Android competitors.

One customer detailed his experience on Best Buy’s customer forum. The person ordered a PlayBook to be picked up at a local Best Buy. The next day, he received an e-mail saying the store did not have any PlayBooks in stock, but he could call the general Best Buy number to check availability in other stores and receive free shipping on the tablet. He decided to wait for the PlayBook to come back in stock online and when it did that day, he placed a second order. The next day Best Buy sent him a second e-mail saying there was “a change to the status of your order,” and his credit card would be credited.

It’s wouldn’t be surprising if Best Buy did want to strip its shelves of the PlayBook, however. Others such as Sprint have already done so when it decided not to order RIM’s 4G version of the tablet in August.