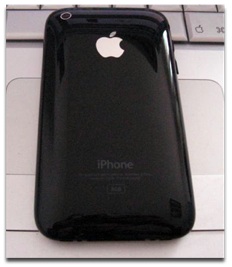 Anticipation for the next generation iPhone, which will work on the faster 3G cellular network, is building. New rumors are popping up daily for release dates and features, but the device is already in the wild being tested, Engadget’s Ryan Block is reporting.

Block has a “trusted source” who has their hands on the device. He claims the device will be about the same size as the current version but will be slightly thicker. It will look drastically different however because the entire thing will be glossy black, removing the metallic finish that makes up the entire back of the device now. It will have true GPS capabilities (as opposed to Apple’s current WiFi triangulation method) and will support 3G. (It wouldn’t be much of a 3G iPhone without it!)

Unfortunately, the device will supposedly still not have a removable battery, but it will feature a headphone jack that is no longer recessed – meaning it will be able to use different types of headphones.

The description seems in line with the first pictures The iPod Observer published earlier this month (above). Interestingly, Block hears the 3G iPhone won’t be out until July at the earliest, going against reports from yesterday that the device would be announced at Apple’s WWDC event on June 9th. Of course it could be announced on June 9th for roll out in July or later in the summer.

Also not noted in this report is the advanced IM/video chatting features that Kevin Rose spoke about last month.