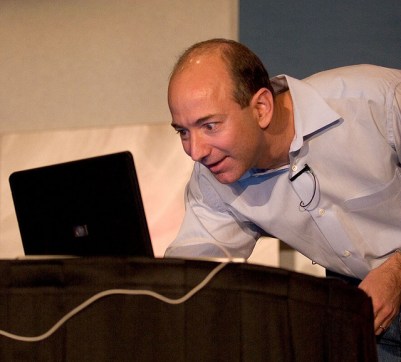 Oh Jeff Bezos, you coy devil. The Amazon CEO dropped some not-so-subtle hints on a future Amazon tablet yesterday in an interview with Consumer Reports — something that makes us wonder how long he can keep this act up.

He added that an Amazon tablet — if such a thing ever came to be — would supplement its popular Amazon Kindle e-book readers, rather than replacing them. That’s to be expected as Amazon wouldn’t want to do anything that would kill its Kindle business, which will only become more popular as the devices get cheaper.

Bezos said that he was aware that tablets were also becoming popular for reading e-books, but that doesn’t mean the end for the Kindle.

“We will always be very mindful that we will want a dedicated reading device,” he said. “In terms of any other product introductions, I shouldn’t answer.”

There’s that coyness again. I mean, it’s not as if Amazon will be forced to deliver a tablet this year thanks to increasing competition from Amazon, Android, and even Barnes and Noble’s Nook Color. Not at all.

He also squashed any hope for a color E-Ink Kindle anytime soon, saying that the technology isn’t yet ready for prime time. But he adds that it’s continually getting improved, and that “it makes a lot of sense for there to be a low-power, reflective color display. I think that’s something you could build a fantastic product around.”

Bezos also spoke a bit about the new ad-supported Kindle. Specifically, that the company chose to keep the ads only on the Kindle screensaver and homescreen because placing ads inside of text would cause consumers to ignore them, in addition to disrupting their reading experience.

As for the long-awaited Kindle library lending feature, Bezos didn’t clarify when we can expect it, other than “sometime this year.” He said that we can expect a collection of titles comparable to other e-readers that feature library e-books, like the Nook and Sony’s Reader.