When entrepreneur Alexander Muse kept running into developers Rylan Barnes and Jason Hudgins over the course of several weeks in Texas, Muse knew he had to work with them. It was a smart move. The trio set up Big in Japan, an application house that focuses on mobile platforms, and by the conclusion of Google’s first Android Developer Challenge, the team had a hand in creating two of the top ten winners.

While Hudgins had separately helped create Tunewiki, a music app for Android that was among the winners, Barnes was the main developer of GoCart, a shopping information app, which was brought under the Big in Japan banner. GoCart, which has just been renamed ShopSavvy as it prepares to launch next month on the first Android-based HTC phones from T-Mobile, brought the team $275,000 for being among the ten winners of the challenge.

But Muse was happy to give all of that money to Barnes for his work on ShopSavvy. And now the company has a lot more money coming in — $700,000 to be precise, in the form of seed financing from Architel LP, a network and IT company which Muse also owns.

Most of this money will be spent securing deals with big box retailers who can implement ShopSavvy in their stores both online and offline to help consumers. ShopSavvy works by using an Android phone’s camera to scan the barcode of a product. On the device’s screen, information from the web is then pulled up and actions such as price comparisons can be done. You may think that big box retailers may not like this since online sources often list better prices, but Muse explained that quite a few of them have contacted Big in Japan about partnerships because they wish to serve their customers better. Many offer price-matching policies that make customers happy. 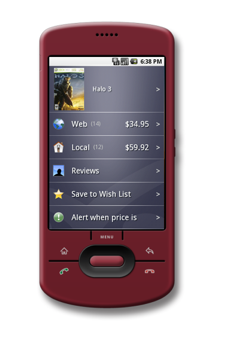 For the next iteration of ShopSavvy, Big in Japan wants to focus on impulse buys. Early next year it hopes to have a “buy it now” function in place that will allow anyone doing a price comparison in its app to immediately make a purchase through an online vendor if they find a good price. Big in Japan would get affiliate revenue off of such transactions, and Muse is confident that will allow them to keep ShopSavvy as a free application.

While Big in Japan is committed to several mobile platforms, it has thus far homed in on Android because, “it opens up possibilities for things we didn’t think were possible,” Muse said. One particular example is that while Apple’s iPhone has a camera built-in, this camera does not have the same auto-focus features that cameras on Android phones feature. This functionality allows ShopSavvy to scan barcodes in real-time, something that would be much more complicated on an iPhone.

I asked specifically about Android’s potential against the iPhone — something which has been up for much debate recently with so many developers working on the iPhone platform, and relatively few committed to Android. Muse told me flat out that from “a worldwide perspective, Android wins.” He reasons that most of the world simply cannot afford an iPhone, and that Android will be be a much easier purchase when it has launched on several different phones — and likely free with carrier commitments in some places.

Muse did say that he was a huge fan of the iPhone, and not only is committed to developing for it, but also owns one. But he says its closed platform has positives and negatives. On one hand, Apple can have tight control over user experience, but on the other that may stymie some innovation. Android, on the other hand, may encourage innovation, but lack Apple’s beauty: Android “is awesome, but it may not be as slick,” Muse said.

“The Androids [meaning the Android camp of developers] are kind of the rebels right now,” Muse half-joked. “More and more will play when you get 500,000 [Android handsets] on the street,” he concluded.

Big in Japan is hardly stopping with ShopSavvy. Following next month’s official Android launch, there is scheduled to be a second Android Developer Challenge next year. Whereas the first challenge focused on building apps on an Android emulator (since no one had a phone at the time yet), the second phase will be about creating apps for real-world usage. Big in Japan plans to enter that competition as well, and has thoughts for several other applications it would like to do.