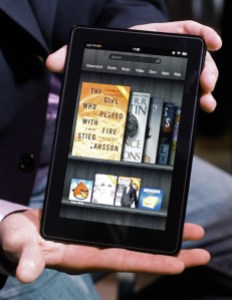 Amazon may be launching at least one larger version of the Kindle Fire in the first half of 2012.

According to DigiTimes, the Taiwanese blog with deep connections in manufacturer supply chains, Amazon is preparing to release the device in new 8.9-inch and 10.1-inch screen sizes. The 8.9-inch size is said to be prepping for launch first.

Currently, the Kindle Fire ships with a 7-inch color touchscreen.

Earlier this month, DigiTimes said the 8.9 inch displays would be coming from suppliers Chunghwa Picture Tubes and LG Displays.

Now, the blog’s sources name Samsung as an additional supplier of the 8.9-inch screens and say the larger screen sizes are due to the suppliers’ promotion of those 8.9-inch touchscreen panels.

Supply chain sources are also naming Foxconn as Amazon’s latest ODM (original design manufacturer). Foxconn, which also produces a great deal of Apple merchandise, will join Quanta as a manufacturer of 7-inch Kindle Fires and will begin production of the 8.9-inch models in the spring of 2012.

The original Kindle Fire had its launch event back in September. The device sells at a low $199 price point and started shipping a week ago.

The company is also reportedly working on a smartphone, also with Foxconn.