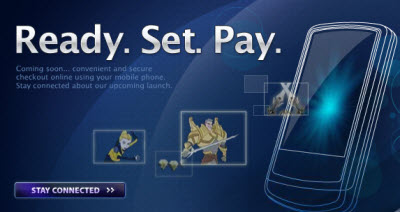 BilltoMobile, a startup that makes it easy to pay for web purchases via your monthly mobile bill, is announcing today that it will make its service available to more than 200 carriers in 60 countries.

The service can be integrated into all sorts of web apps, where users pay for digital items such as virtual goods in social games. The expansion into international markets is a sign that BilltoMobile has a lot of momentum with carriers. It already has direct carrier billing deals with Verizon Wireless, AT&T and Sprint. Now, potentially billions of users could access BilltoMobile’s services, which launch globally next month.

“The global mobile payments market – and in particular the EU – is still very fragmented, and no one payment company has been able to establish the consistency and clear cut operations,” said Jim Greenwell, president and chief executive, BilltoMobile.

The San Jose, Calif.-based company lets users charge online payments to their mobile phone bill. You simply indicate that you want to pay with your mobile phone number and enter the phone number. Then you get a secure text message on your phone. You then enter the code on the web order. BilltoMobile makes sure that the purchase appears on your next mobile phone bill. Transactions can be completed in 15 seconds and users don’t have to enter a long 16-digit credit card number that they haven’t memorized.

BilltoMobile may be able to reach 240 million mobile subscribers.

This kind of purchasing has been popular in Europe and Asia, but now BilltoMobile, which is majority owned by Korea’s Danal, is making it more practical for U.S. consumers. That’s because BilltoMobile figured out how to directly integrate its billing system with the carriers’ own networks. It also figured out how to do this integration at a low cost and in real-time, completing purchases in seconds. It competes with rivals Zong and Boku.

Because it is directly integrated into a carrier billing systems, BilltoMobile does not have to send its verification via a premium text message service, which costs more money to do. BilltoMobile can thus charge fees to the merchants that are higher than credit card fees but far lower than prepaid card or SMS text message fees.

Between its major carrier partners, BilltoMobile can now reach the vast majority of mobile subscribers in the U.S., and now it is shooting to sign up the whole world. BilltoMobile says the list of merchants using its solution is growing. Those merchants include game companies that sell digital goods inside their games as well as others who sell virtual goods online. Partners include game publishers Nexon, NHN, Perfect World and Gamania.

BilltoMobile was founded in 2006 and spun out from Danal in 2007; this year, Danal bought back its majority ownership.