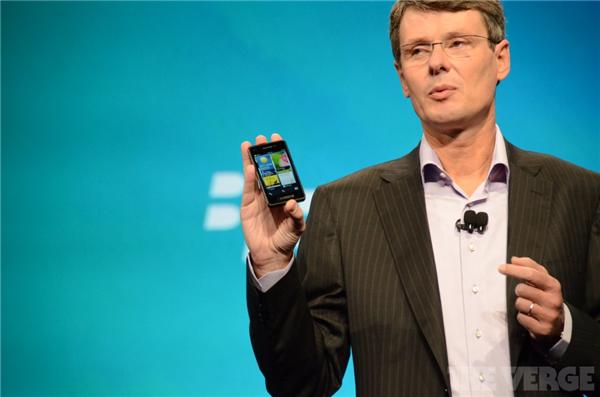 It’s been a long time coming — today we finally got our first glimpse at Research in Motion’s next-generation platform, BlackBerry 10, which aims to breathe new life into the company’s aging smartphones.

New RIM CEO Thorsten Heins hit the stage at BlackBerry World in Orlando, Florida today to show off the new platform. “We’re taking our time to make sure we get this right,” he said, perhaps hoping to squash criticisms of the long run-up to the availability of BB10 devices (expected later this year).

BlackBerry 10 is based on the QNX operating system used in RIM’s PlayBook’s tablet. Today, Heins showed off an early build of the OS, BlackBerry 10 Dev Alpha, running on developer preview hardware. (It actually looks a lot like the PlayBook OS squeezed down to a smaller screen.) Developers attending BlackBerry World will receive one of the prototype BB10 devices, which will help them begin to develop new apps for the platform.

The BB10 interface seems refreshingly simple: the home screen consists of four widgets (weather, calendar, music, and photos, in the demo today), as well as phone, camera, and search buttons on the bottom of the screen. Notifications come in on the right side of the screen, and you can also swipe right to move into the app that the notification came from.

Surprisingly, Heins declared that BlackBerry 10 apps never stop running, which will allow you to easy juggle multiple apps without a sweat. It’s unclear how RIM is managing to do this without killing battery life though — something that BlackBerry users take seriously.

BB10’s software keyboard looks a lot like a typical hardware BlackBerry keyboard, but RIM also personalizes the keyboard to your typing style to remove latency. You can access numbers and symbols by gesturing from the keyboard, and RIM has also included some predictive text capabilities for one-handed typing.

RIM also briefly showed off the BB10 camera, which allows you to tap anywhere on the screen to take a photo. It also gives you the ability to step back or forward slightly from the moment you took a picture — so if someone blinks, you can save the picture pretty easily.

Heins described BlackBerry 10 as a “mobile computing engine.” He showed off a single BB10 device power several screens in a connected car (don’t expect to see this in your Accord anytime soon though). He reiterated that BB10 will launch sometime later this year.