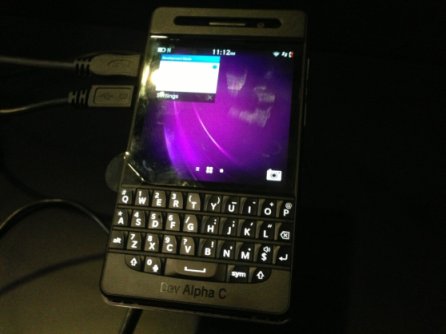 The smartphone world may have moved away from the hardware keyboard, but BlackBerry refuses to let it go.

At at developer event in Amsterdam today, BlackBerry unveiled the BlackBerry Dev Alpha C, its latest developer-only phone. A combination of the Z10 and the Q10, the Alpha C has both a physical keyboard in a fairly sizable screen.

That combination is an important one for BlackBerry, which has been trying to bridge the gap between touch- and- hardware-based input.

As BlackBerry development manager Ken Wallis noted in a blog post today, BlackBerry’s new WebWorks development kit treats software and hardware keyboards as if they were the same thing. Developers should appreciate that, and this should make it easier for them to design their apps for devices with varying sizes and configurations.

The Alpha C announcement comes as analysts are reporting some pretty good early numbers for the BlackBerry Z10, which launched in the U.K. last week.

“Initial feedback we have received from distributors on the first days of sales is particularly positive,” Bernstein analyst Pierre Ferragu said in a research note today.

Perhaps the return of the BlackBerry isn’t so farfetched after all.