At a company event in Toronto today, BlackBerry officially launched the Passport, a new smartphone with a 4.5-inch display, a touch-enabled physical keyboard, and a strange 1:1 square aspect ratio.

On sale in Canada now, the Passport will ship with BlackBerry’s 10.3 operating system, cost $250 with contract, and be available on AT&T in the U.S. soon.

This isn’t an unveiling, however: BlackBerry heavily teased the device in June and confirmed just two days ago that the handset would cost $599 unlocked. To further end any lingering feelings of mystique, a detailed hands-on video with the device was published in August. New details revealed today include the device’s 453 DPI screen, 14 MP camera, and 30 hours of battery life. 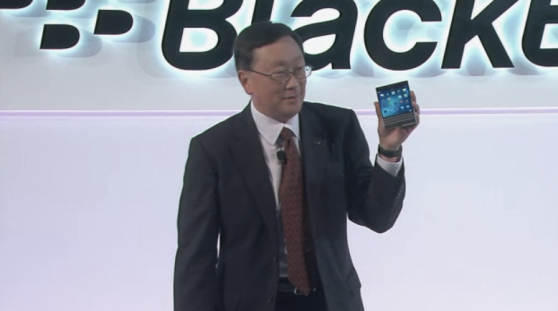 At the event, BlackBerry also touted improvements in the 10.3 BlackBerry OS update, including BlackBerry Assistant, a voice assistant service with an emphasis on productivity. BlackBerry also introduced Blend today, an iCloud-like service designed for the enterprise.

Hardware is not BlackBerry’s primary moneymaker, as we detailed in June, but the company appears determined to stay competitive in the space. BlackBerry has, however, made it clear that the Passport is not a one-size-fits-all device. According to John Sims, president of BlackBerry’s enterprise unit, “the Passport is not going to be a device for everyone.” Sims went on to highlight specific use cases in which the BlackBerry will apparently excel, including spreadsheet analysis and use by healthcare professionals.