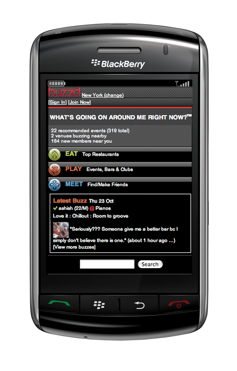 The BlackBerry Partners Fund is a $150 million fund set up by BlackBerry-maker Research In Motion (RIM), the Canadian bank RBC, Thomson Reuters and the venture firm JLA Ventures. It was set up in the wake of the iFund, the $100 million fund set up by Kleiner Perkins to invest in iPhone application development. While the fund is not explicitly tied to only BlackBerry devices, the development of applications for those smartphones is clearly the main purpose of the fund.

After launching in May, the BlackBerry Parners Fund says it has reviewed thousands of applications and business plans for companies hoping to get money to work in the mobile sphere.

It’s no real surprise that an LBS application (Buzzd) would be among those picked. The first company to receive funding from the iFund was Pelago, makers of the LBS social network Whrrl. Mobile commerce and mobile travel are also two logical, and likely safe choices.

It’s interesting that Buzzd actually already has an iPhone application, but it’s not exactly what I would call popular. It has a grand total of three reviews on its page in the App Store and two are quite negative about it — calling it not much of an app. To be fair, none of the LBS applications on the iPhone are hugely successful yet.

With pressure not only from the wildly successful Apple App Store (over 5,000 apps and 200 million app downloads in just over 100 days), but the newly launched Android Marketplace, it’s clear that RIM needs to create a compelling assortment of third party apps on the BlackBerry pronto. While these three all seem rather ho-hum, the addition of the mobile live streaming service Qik on the device a few days ago was a nice pick up.

The BlackBerry has risen to become nearly synonymous with the smartphone, at least in North America, but last quarter, Apple announced that its iPhone outsold the BlackBerry, a pretty impressive feat seeing as Apple has only been in the mobile business for just over a year now. BlackBerry has some new touchscreen devices that are similar to the iPhone coming to the market, but the App Store’s popularity is giving Apple’s device a huge leg up on competition.

Last week, the BlackBerry Partners Fund announced the winners of its first Developers Challenge. The winners for that each received a $150,000 investment from the fund and were entered into the “Jump Start” program to potentially get even more money.

But the three outside investments today were about significantly more money. BlackBerry Partners Fund investment in Buzzd is part of a $3.2 million series A for the company. Also participating were Greycroft Partners, Monitor Ventures and Qualcomm Ventures.

For Digby, BlackBerry Partners Fund is part of a $5.5 million series B round. This round also included existing shareholders.

For WorldMate, BlackBerry Partners Fund is part of a $8 million series C round. Motorola Ventures and AMC Communications are also participating.