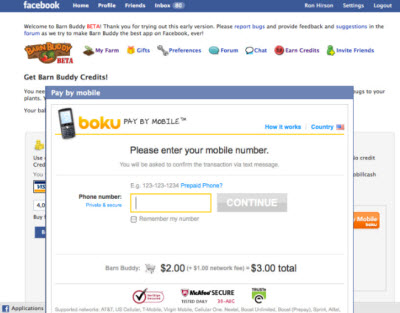 Boku is on a roll. The mobile payments company bought two companies, combined them and, in June, launched its service, which lets people pay for online goods and games with their mobile phone accounts. Now it has raised $25 million in a third round of funding.

The San Francisco-based company was one of the finalists in our startup competition at MobileBeat. Now its service is available in 58 countries, and it has more than 1,000 online merchants, game publishers and others using its service. DAG Ventures led the round, and investors Benchmark Capital, Index Ventures and Khosla Ventures also participated.

Boku lets users pay for an item simply by using their mobile phone number. On Facebook, for instance, you can pay for a virtual good in a game using your phone number, which is often easier than remembering our credit card number, says Ron Hirson, senior vice president of product and marketing. Boku verifies the transaction by sending a text message to your phone. You then reply by hitting ‘y’ in a return message. Then the charge for the item shows up on your next mobile phone bill.

The amount of money raised is impressive. So is Boku’s speed. The company has agreements with 190 carriers around the world. In June, it announced it had raised $10 million and was buying two mobile payments startups, Paymo and Mobillcash. (Prior to that, it had raisd $3 million). In the past month, the company announced 12 new partnerships with online game developers.

The hiccup for the moment is that Boku relies on phone carriers to complete the billing transaction. For that service, the carriers collect a hefty fee. But Hirson said he believes that the mobile carriers will lower the fees this year to kickstart business.

The company was founded in 2008 and it has 50 employees. Competitors include Zong, PayPal, credit card companies and other direct payment providers. Zong in particular has an interesting twist: It lets you use your mobile phone number to pay for something, but instead of charging the transaction to your cell phone bill, Zong charges it to your credit card. That means you avoid the big cell phone carrier charges.