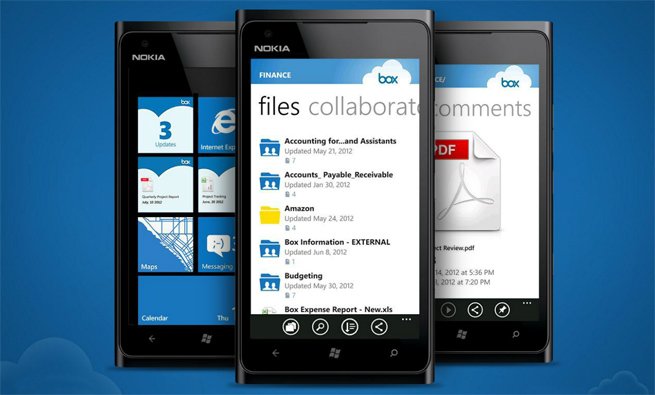 Enterprise cloud storage startup Box has launched an app for Microsoft’s Windows Phone platform and partnered with chip-maker Qualcomm in hopes of getting more pre-installs on phones and tablets, the company announced Tuesday.

Box lets you store content in the cloud so you can share it with colleagues and access it from anywhere, regardless of what computer or device you’re on.

Box has heavy cloud storage competition from Google, Microsoft, Egnyte, Nirvanix, and more, but it has still attracted more than 11 million users across 120,000 businesses. One of the best aspects of Box has been its early on adoption of mobile platforms, and now 40 percent of Box usage comes from mobile. In 2008 it launched an iOS app, and in 2010 it moved over to Android. Now Microsoft’s Windows Phone will join the Box party.

“This isn’t just a checkbox for us,” Matthew Self, Box’s VP of platform engineering, told VentureBeat. “We don’t want to be tied to just one or two platforms. We’ve worked with Microsoft to make this a smooth experience.”

Self said that not only is it smart for Box to be available across more platforms and hit more customers, but it also is a step toward future Windows development. The company is investing time in Windows Phone 7 now and eventually will launch fully fledged Windows 8 and Windows Phone 8 apps.

Box’s app on Windows Phone has the following features:

Along with the Windows Phone news, Box has partnered with Qualcomm. The partnership means Box has a better chance of getting pre-installed on smartphones and tablets that use the Snapdragon chipset. With Qualcomm designing its proprietary software to better work with Box, the company hopes other partners will be receptive. Box plans to offer 50GB of free cloud storage phones or tablets with Snapdragon as an incentive.

“Qualcomm supports Windows Phone and Android, so this is a good chance to extend our reach further,” Self said.

In the past, the company had agreements with LG and Sony to put Box’s app on their Android phones. The company said it is in talks with carriers and manufacturers as well to help push even more pre-installs.