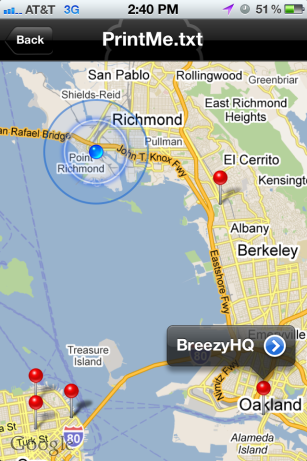 Mobile printing application Breezy announced today that it is releasing an iPhone app and a GPS printing tool that can seek out nearby partnered printers and send out a print request.

Those in desperate need of a quick print job can choose a printer from one of Breezy’s thousand-ish partners that will print out the document. Some partners charge for print jobs, some don’t, but the user will have to pay whatever the partner charges when they pick up the document, Breezy chief executive Jared Hansen told VentureBeat.

Free Breezy users — who previous to today’s announcements could already print documents with a branded watermark from Blackberry phones — will also have to pay a convenience fee to use the GPS-enabled service. Premium users, who pay a monthly or yearly subscription fee that removes a watermark from all printed documents, won’t have to pay anything.

“There’ll be almost 1,000 locations online as of tomorrow and a couple thousand more coming online in the next few months,” Hansen said. “Any small business that wants to join the network can do so by just downloading our software for free.”

The company also experimented with creating a Facebook Credit-style system that would make Breezy users buy Credits for printing documents that would automatically pay the partners. But the company’s partners told Breezy that the process was frustrating and they still wanted to have a direct relationship with the customers, Hansen said. So they ended up killing the plan.

Breezy went with developing an iPhone application instead of an Android application because that’s where most of the demand for a mobile printing app exists, Hansen said. The company started work on the app several months ago — back when it wasn’t immediately clear that iOS devices like the iPad would come to dominate the mobile enterprise device market.

“For a while I thought Android would take off first in the enterprise; it seems that has not happened and that’s been pretty fortunate for us,” Hansen said. “There are a lot of nice solutions for Android that aren’t as well-developed on iOS yet.”