Please don’t give that sketchy dude at the bar your number — there are apps for that. Burner is one of them, and it got $2 million for its disposable phone number app today. 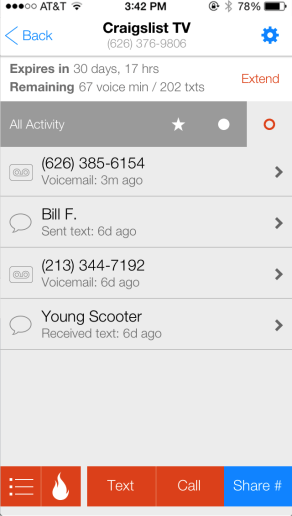 Burner, created by Ad Hoc Labs, lets you purchase phone numbers and then “burn” them once you’re done. The company says it is privacy-focused, although many people have already noted that there are obvious criminal use-cases for the app. That said, this is a good way to protect yourself from strangers when listing items for sale online or to communicate with people you don’t plan on keeping in contact with.

The company further launched a revamped version of its app for iOS 7. It’s Android app made its debut in April this year.

You can manage your phone number’s from Burner’s new app. The company will take a phone number offline once it’s burned and wait until activity on it dies down to recycle it to a new user.

Investor David Frankel, managing partner at Founder Collective, explained that he sees a world where phone numbers become more like email addresses. You should be able to create and use different numbers for different use cases. He believes Burner has the making to bring about that change.

Venrock vice president Marissa Campise, another investor, further mused that people’s identities should one day be separated from a single phone number. But at the moment, Burner is not an app to go anonymous on. Due to the nature of the product, the company will lawfully provide data if it is subpoenaed.

Burner was founded in January 2012 and is headquartered in Los Angeles, Calif.