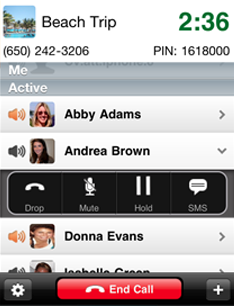 Callvine, a startup run by eFax’s founder and former CEO, Rudy Prince, announced Monday that it has raised $4 million for its group calling and texting iPhone app.

The iPhone app, which it said it plans to launch Tuesday, is available for free on Apple’s App Store and lets users call up to 20 people simultaneously, or text 100 in a group conversation. Users open up the app, select their desired recipients, and choose if they want to text or call the recipients. The company is initially offering free calling for up to 20 people, though it plans to charge for pay-as-you-go minute bundles starting at $5.99. Group texting, as with other apps, relies on your normal texting plan and doesn’t involve an additional charge.

While the iPhone has seen its fair share of group texting applications, group calling is fairly new to mobile devices. It’s a concept Callvine hopes to popularize in the space. Millions of group meetings and discussions are held everyday through conference calls and Skype — why should you not also be able to conduct these on the go?

Naturally, the professional market is one of the startup’s main targets. Its challenge in reaching business users will be expanding beyond the iPhone to devices popular with business users, such as RIM’s BlackBerry and Google-powered Android devices, which Callvine has plans to do.

Group texting, initially introduced by Twitter in 2006 as a way to stay connected with friends, has evolved and seen growing interest since the iPhone’s rise, although it has not yet hit the mainstream. Gogii, the maker of TextPlus, raised $5 million from Kleiner Perkins last year for its free group texting app. TextFree, another group texting app, reported 2 billion text messages as of February 2010 and has also raised $11 million in two rounds from Kleiner Perkins.

Based in Austin, Texas, Callvine’s first funding round comes from local firm S3 Ventures. The company has 12 employees and is hiring.