In North America, the market for wearables — particularly wearable bands — is still continuing to grow, and Apple’s popular Apple Watches unsurprisingly continue to lead the pack in shipments, research firm Canalys notes in a new quarterly report released this morning. But the market is segmenting into two clear sweet spots, $200 to $299 and $300 to $399. These now collectively represent 60% of all shipments, with the lower price bracket seeing slightly more shipments than the higher one.

During the second quarter of 2019 alone, the North American wearables market hit a $2 billion valuation, Canalys says, with over 60% of Apple’s 4.7 million global Apple Watch shipments going to the region. As a result, the Apple Watch grew 32% over the 2018 quarter, shipping 2.9 million units for a 37.9% North American market share. Fitbit was in second place with 1.9 million shipments, losing smartwatch sales year over year while shipping more “basic bands.” Samsung, Garmin (0.5 million) and Fossil (0.3 million) distantly rounded out the top five, all falling well short of the “others” category at 1.3 million units.

Only Samsung posted strong annual percentage gains — a 121% increase in shipments — though it started and ended at low absolute numbers. Canalys suggests the company’s new focus on Galaxy Watch Active and Active 2, priced between $200 and $300, is helping it get “nearer the bullseye — hitting the right price point in a way that spurs massive demand.” 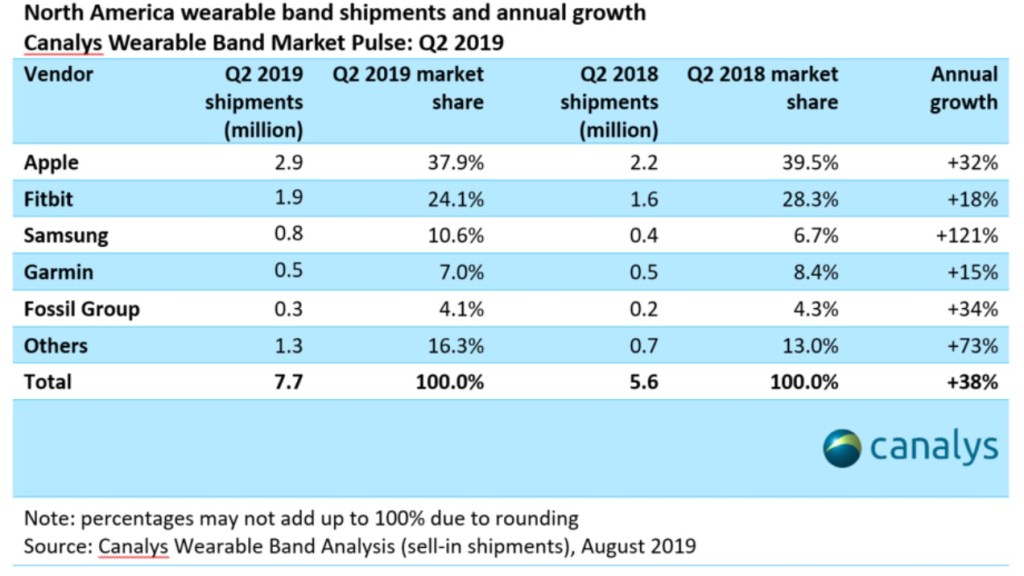 Interestingly, the firm suggests second-place Fitbit dropped the ball with its Versa Lite, describing the device as “overly pared-down” and “losing functionality” without appropriate targeting. Fitbit’s North American shipments grew only 18% year over year, and its market share fell to 24.1%, notably still over twice as high as Samsung’s 10.6% share.

The report suggests the market for smartwatches priced at $500 or higher has contracted significantly, with very few shipments coming from the $700 or above price tier. Apple notably discontinued its ceramic Edition watches, which started in that price region, but the company continues to sell leather-banded Hermes models at steep premiums. Apart from certain Fossil sub-brands, other companies rarely play in the category, which might account for the low number of units shipped.

At the present time, Apple starts its flagship Series 4 Apple Watch at a $399 price point, with the larger 44mm model at $429 and models with LTE cellular support beginning at $499 — stainless steel versions all carry $300 premiums. Prior-generation Series 3 models start at $279 and climb to $409 with cellular connectivity and a larger body size, which Samsung has aggressively targeted with the new Galaxy Watch Active2 at a $280 starting point.