BlackBerry CEO John Chen said his company may exit the handset business if it’s not profitable in a year.

Chen made his comment on stage at the Code Mobile conference in Half Moon Bay, California Thursday.

BlackBerry has been moving its focus toward security and device management software for the enterprise, but has until now held fast to its not-so-popular phones.

That said, Chen was quick to say that he believes that U.S. consumers and businesses want the advanced security features of a BlackBerry phone.

“I think the market wants security,” Chen said. Chen pointed out that he also transfers the technology used in BlackBerry phones to other company initiatives, like the Internet of Things.

Chen also said that he plans to merge his company’s BB10 OS with Android in the near future. The idea is to bring all the advanced security features of BlackBerry’s BB10 OS over to Android on BlackBerry devices, so that his company would only have to manage one mobile OS.

Re/code’s Ina Fried, who interviewed Chen onstage at the event, asked him how long BlackBerry might need to maintain the BB10 OS if merging its security features with Android goes well. 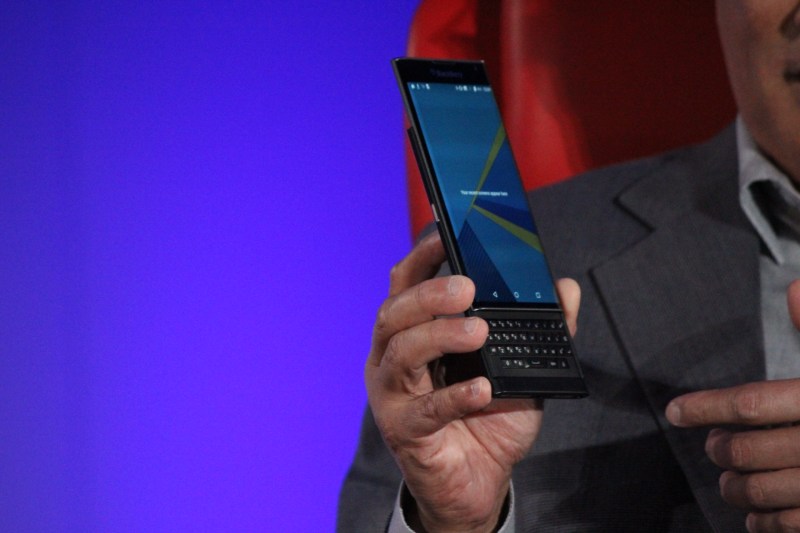 Above: Chen shows off the BlackBerry Priv.

“For the next year at least I need to,” Chen said.

However, Chen said his company is now preparing to release two new versions of BB10 that have advanced security features for government clients.

Chen was here showing off his company’s new Priv smartphone, which focuses on providing high levels of security.

The Android-based phone will come out later this year, Chen said.

The Priv has a physical keyboard that doubles as a trackpad. The phone is also built around security features, especially those that would be needed by enterprise users.

“The [only] other phone that can claim that their security is better than us is the Blackphone,” Chen said.