In hot pursuit of the $16 billion-plus Facebook and WhatsApp merger, China’s Alibaba is leading a massive $280 million round in mobile messaging network Tango, which brings social fun and entertainment to chatting on your smartphone.

Alibaba is investing $215 million in the round, while the rest is made up from participation by Tango’s existing investors. 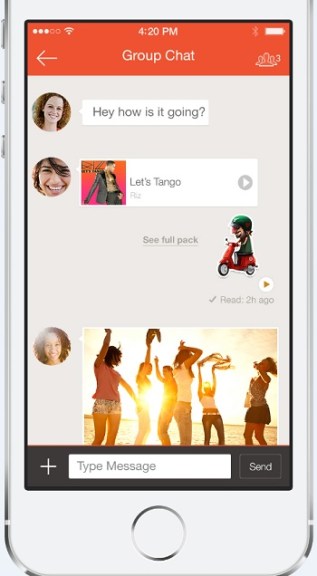 Alibaba is a giant e-commerce company in China that is about to hold an initial public offering in the U.S. The deal shows how aggressively Alibaba and Tango want to compete with Facebook, and it underscores the growing importance of the valuable services on top of mobile messaging platforms.

“The disruption of the communications industry is well under way,” said Eric Setton, founder and chief technology officer of Tango, in an interview with VentureBeat. “This technology is disrupting established systems for distributing media.”

Tango combines social media, mobile, and content into a form of communication that makings sending messages to your friends or sharing things with them more fun.

Tango now has 200 million registerd members for its mobile messaging network, which resembles WhatsApp, Kakao, Line, and WeChat as a modern-looking replacement for instant messenger and text messaging services. The network enables more fluid communication and supports apps that depend on social activity, like games or photo sharing.

The company has about double the number of registered users compared to a year ago. Overall, monthly active users is 70 million. Engagement has doubled in the past year.

“Tango has exhibited tremendous growth because of its unique approach to combine free communications, social and content,” said Joe Tsai, Executive Vice Chairman of Alibaba Group, in a statement. “We were simply blown away by the vision and quality of the team at Tango and believe they have a disruptive way of looking at the mobile and messaging opportunity.”

Tango has a smaller community than WhatsApp’s 450 million users, but it has pursued a different strategy. Tango has a lot of momentum because of its focus on socializing mobile gaming. It is also strong in certain territories such as the Middle East.

“The Facebook-WhatsApp deal has put a spotlight on this space that is truly remarkable,” Setton said. “This deal should add to the excitement.”

Tango has been much more aggressive than WhatsApp at trying to duplicate the success of Kakao and Line by investing in games. The company has launched more than 30 third-party games on its platform on iOS and Android.

“We are working with some of the most exciting game developers in this space,” Setton said. “It has panned out very nicely for us. We’re doubling down on that effort. We will be able to pursue deals with AAA developers.”

He said that the company is getting high monetization and engagement for games. The company will be throwing its own Happy Hour event at the Game Developers Conference on Thursday in San Francisco.

“People are starting to understand that beyond messaging, there is an opportunity to create discovery networks through an ecosystem of third-party developers,” he said. “You can actually discover new media, like games or music, through the network of your friends and family on your mobile device. It’s very natural, and it’s a huge opportunity for us. It could completely turn on its head the world of distribution on mobile.”

Alibaba will have a minority stake in Tango and a seat on its board.

It’s not clear what Tango’s valuation is, post deal. Asked if the value was crazy, Setton said, “Some people asked me if I thought the WhatsApp transaction was crazy. In my mind, it was a bargain. This is probably the most competitive area in mobile today. You have to look to the long term to be part of the conversation. The rate of innovation in this space is amazing. We are the underdogs, and we need all of the help we can get.”

Alibaba is expected to be able to do a lot of marketing promotion for Tango in a number of countries around the world.

“There are strategic initiatives we can do together,” Setton said.

Correction: A previous version of this story claimed Alibaba was investing the full $280 million of this round. It’s instead leading the round with a $215 million investment.