Troops.ai, a Slackbot (or “app,” as Slack prefers it), is launching today to tie Salesforce CRM data to Slack, meaning salespeople can use a digital assistant to help them do what every salesperson I know hates — yanking data in and out of Salesforce. The startup is also announcing a $2.6 million seed round led by First Round Capital.

Wherever you sit on the “to bot or not to bot” argument, there are three compelling certitudes:
1.) Most chatbots today are a square peg/round hole experimentation.
2.) A bad service paired with a bot particularly bad.
3.) Dozens of bot developer platforms are emerging — the experimentation will go on — and it’s completely worth it. Bots for tightly defined use cases will work if they’re designed well.

A flowers bot or order-an-Uber bot might not solve that many problems right now. Inside sales bot totally does. Bots for business will work.

Why? Troops-bot, in particular, solves a pressing need. There’s a ton of companies out there to help salespeople be better salespeople. Whether that’s productivity tools, content tools, contact augmentation tools, predictive pipeline management tools — the list goes on. I like to think simple problems call for simple solutions. The problem in this case is using Salesforce with some semblance of consistency.

Salesforce is a revolutionary and powerful tool — but remembering to use it the right way every time is hard. Who likes logging calls? Or worse, using the mobile app? As Troops cofounder and CEO Dan Reich wrote on the Troops blog about the evolution of CRM in the cloud, “As time went on, our computers became smaller and so software developers all over the world tried to pack a ton of functionality into a little screen by simply making those same field and forms smaller. If you ask most people today who rely on this software to do their jobs, they’ll tell you the experience isn’t exactly enjoyable.”

I’m inclined to agree with him, and I’d argue most salespeople do too. 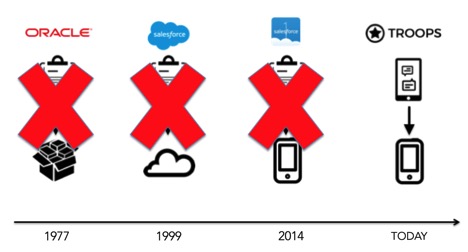 I caught up with Reich to figure out why his bot is different than the noise out there. He has a clear understanding of what his bot should and shouldn’t do. “I think the word ‘bot’ means different things to different people. I don’t believe a pure conversational-only experience is the best experience for many use cases. I also don’t think fields, forms, buttons and boxes are the right experience either. There is a balance. Generally, I’m bullish on this idea that rich experiences, for the consumer and for the enterprise, will happen within a conversational platform. WeChat is Exhibit A for this success in action.”

While WeChat actually isn’t the gold standard bot-topia some pundits are making it out to be (really, most of the bots on WeChat have failed), where it wins is becoming a mobile operating system by which text, conversations, payments, offline experiences, appointments — really anything you do in a standalone app — gets shrunk down into a web view in WeChat. That’s why it’s successful. It’s an operating system. For Troops, Slack is the operating system. Salesforce is the application. Troops is the interface. Make sense?

I love Amir Shevat’s tidy bot definition. He says, “Bots are digital users within a messaging product. Unlike most users, they are powered by software rather than by a human , and they bring a product or service into a given messaging product via the conversational interface.”

Bots are new and exciting because they function where most people are today — in messaging apps. “Messaging is inherently mobile. It is literally the most common digital behavior on earth and we think the future of CRM is messaging too,” Reich said. The phrase “most common digital behavior on earth” rings of hyperbole. But there’s data to back it up. “At Troops, we fundamentally believe that the future of ‘getting things done’ is going to look less like static fields and forms, and more like a conversation with a human being,” said Reich. “Today, people are calling that paradigm shift and product a ‘bot.’ These bots represent new ways to solve old, but critical problems for the workforce. For example, would you rather have to enter data, row by row, cell by cell, page by page on a customer meeting you just had? And now think about that in a mobile environment which, by the way, is where the world is headed if not already there.”

There are a lot of arrows pointing why this could be a thing. I think bot enthusiasts are waiting for some “aha” moments. Troops could be one. “Troops lets salespeople search Salesforce by any name or field to view Salesforce data in stream, in Slack. We let people access reports on their pipeline with email tracking to show things like how many days it’s been since you talked to a customer. We also automatically surface Salesforce data in collaborative conversations that drive sales,” Reich said.

“Right now a lot of this is super manual and you have to remember to do it. With our Google apps integration, we do a lot of this tracking automatically, and also provide intelligent suggestions when we notice an inconsistency. A very simple example would be sending a customer a followup email. It’s very easy for our bot to understand you had a first meeting with a customer that was in Salesforce and on your calendar — and then identify when you might have dropped the ball on something like a followup email or a CRM update that the meeting happened. Seamless Salesforce reconciliation after identifying these inconsistencies is a core part of what we are doing at Troops.”

If that sounds like a remind-you-to-fill-out-your-CRM-data bot, it’s not. That would be incredibly annoying. Troops is insisting they’ll be blended right in your workflow — listening to your Slack conversations, reading your emails, and chiming in at helpful moments … or available when you call on it.

Troops already has many large enterprises testing it out (that we can’t mention, but which you surely know). The seed funding will be used for product and engineering.