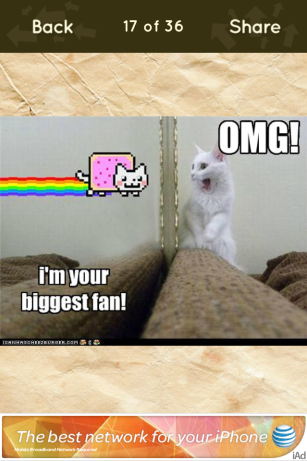 Cats. The iPhone haz them.

The Cheezburger Network, a group of websites highlighting silly picture, has launched its first iPhone application, porting thousands of ridiculous photos from its array of sites onto the iPhone’s 3.5-inch screen.

The application lets iPhone owners quickly browse through images from sites on the Cheezburger network.  It does the job — that is, getting images of stupid cats and other animals to an iPhone user as quickly as possible — pretty well. But the app is a little dodgy at first (it crashed a few times), and sometimes the animations aren’t all that smooth. The buttons for the app also do not give any indication that the user is pressing the button, such as changing color or shape, which feels a bit weird.

As with the main site, users can share photos and videos they like over Twitter, email and Facebook with a few swipes and button presses. The app also delivers users to the LOLmart, an online store that features merchandise with LOLcat photos. There isn’t a native store for the app, so it just takes users to the main web page, not a version optimized for mobile devices.

The Cheezburger Network is known for bringing pictures of “LOLcats,” an Internet meme involving ridiculous captions for various cat photos, into mainstream popularity. The captions are usually intentionally misspelled and come across as some kind of pidgin. The meme was popular on image-hosting sites like 4chan before the Cheezburger network came into being.

The Cheezburger Network recently bought meme encyclopedia Know Your Meme from Rocketboom, the site’s original owner, to serve as a complement to its current meme repository called Memebase. That site is much more like I Can Has Cheezburger, the company’s flagship site, in that it simply hosts memes rather than documenting the creation and evolution of each meme. It was reportedly a seven-figure deal, though no exact financial details were disclosed. 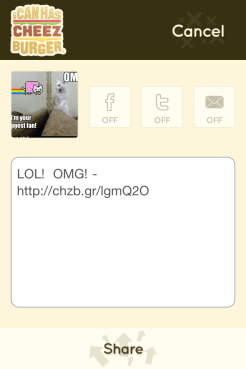 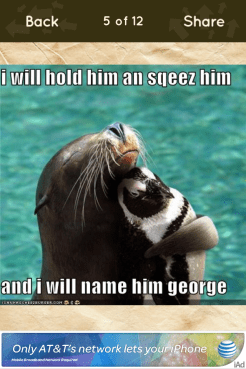 Ben Huh started the company in September 2007. The Seattle-based startup has been profitable since them and now attracts 16.5 million monthly visitors adding up to 375 million pageviews and 110 million video views. The company recently raised $30 million from Foundry Group, Avalon Ventures, Madrona Venture Group and SoftBank Capital.