Standards-essential patents are the ones so important that everyone in an industry needs to license them, turning major innovations into royalty goldmines for their inventors. If the latest research from patent analytics firm IPlytics (via Nikkei) is correct, China’s share of 5G standard-essential patent filings has grown sharply from the 4G era, and could enable Chinese companies to earn a third of all 5G patent revenues — even if the companies are banned from selling products in countries where their patents are being used.

According to IPlytics, companies in China have applied for roughly 34% of the world’s major 5G patents as of March 2019, compared with South Korea’s 25%, and 14% each for the United States and Finland. Sweden stood at nearly 8%, and Japan at almost 5%, while Taiwan, Canada, the U.K., and Italy rounded out the top 10 countries, each with under 1% shares.

It’s worth noting that this measurement process isn’t perfect, as it relies on the firm’s analysis of a global database of 94 million patent and standard documents, not final issued patents. Using keyword searches, the firm identified around 74,500 key 5G patents in that pool, with the automotive sector strongly leading the way. Over several years of filings, 5G internet of things and smart energy patents have been modestly on the rise, while smart factory patents have remained small but solid. 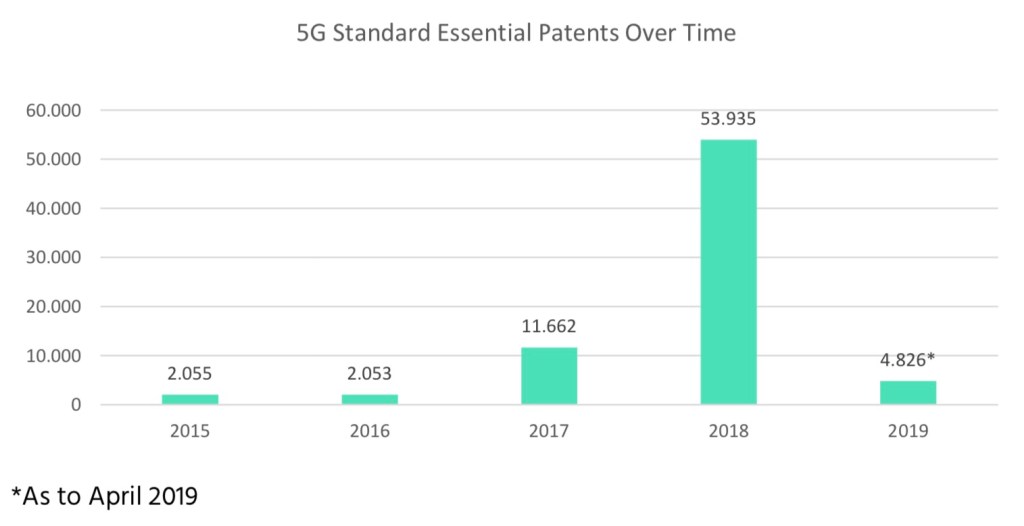 Also interesting: China’s share of 5G patents is around 50% higher than its 4G share, where it was almost identical to South Korea — each had roughly 22% of global patents. While South Korean, Finnish, and Swedish companies have slightly increased their relative percentages of patent filings in the 5G era, the U.S., Japan, and other countries have all fallen at least a little behind their 4G paces.

As judged by individual company filings, the big winner of the 5G generation could be China’s Huawei, which holds over 15% of the world’s 5G patents, while Finland’s Nokia has nearly 14%. Korea’s Samsung is just under 13%, with key rival LG at over 12%. The top U.S. company, Qualcomm, has just over 8% of the standard essential 5G patent filings, roughly equivalent to Sweden’s Ericsson, but behind the 11.7% share of China’s ZTE. Intel holds over a 5% share, with a variety of Chinese and Japanese innovators grabbing smaller pieces of the 5G pie.

The value of these patents is considerable. Just yesterday, Qualcomm said that it will receive between $4.5 and $4.7 billion in back payments from Apple alone, representing around two years of missed 4G royalty payments due to their international legal dispute. Qualcomm’s fraction of essential 5G patent filings is only slightly smaller than its 4G holdings, so its annual 5G patent licensing revenues across multiple licensees should easily be in the multiple billions of dollars.

Assuming that the final patent percentages shake out similarly to the filings, many of the earliest 5G pioneers will be handsomely rewarded with patent revenues regardless of whether they’re supplying the specific base stations and chips individual customers are buying. This should enable China’s Huawei and ZTE to make up somewhat for the sales they’ll lose in foreign markets, while giving all of the innovators a guaranteed revenue stream that could be used to discount their individual products for sale to carriers and 5G device customers.