Until last month or so, the U.S. was the leader, claiming around 22 percent of the world’s Android and iOS activations. But between February and March 2012, China eclipsed the U.S. and now accounts for almost one quarter of smartphone activations globally.

This new data comes from mobile analytics shop Flurry, which last year identified China as a mobile contender to watch out for and showed that Chinese consumers’ app sessions were growing by 870 percent during the first three quarters of 2011.

Now, Flurry is showing year-over-year growth between Q1 2011 and Q1 2012 at 1,126 percent — that’s for app sessions from Chinese consumers’ smartphones.

Here’s a chart showing overall smartphone activations for China and the U.S.: 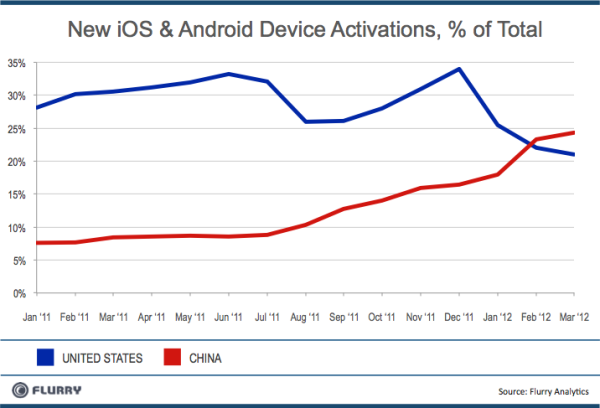 Since the U.S. has more longevity in smartphone consumption, Flurry still estimates that the U.S. has twice as many active smartphones as China. However, Flurry exec Peter Farago notes in the company’s report, “With China now activating more devices per month than the U.S., this means that the gap is closing between the two countries in terms of installed base.

“Not only is China already the second largest app economy, but also could eventually overtake the U.S. as the country with the largest installed base of smart device users.”

Right now, Samsung is the leader in smartphones in the Chinese market; however, as 4G LTE service comes to that area, the iPhone may see huge growth. Another vertical to watch in China is tablet adoption, especially as iPad adoption heats up there.