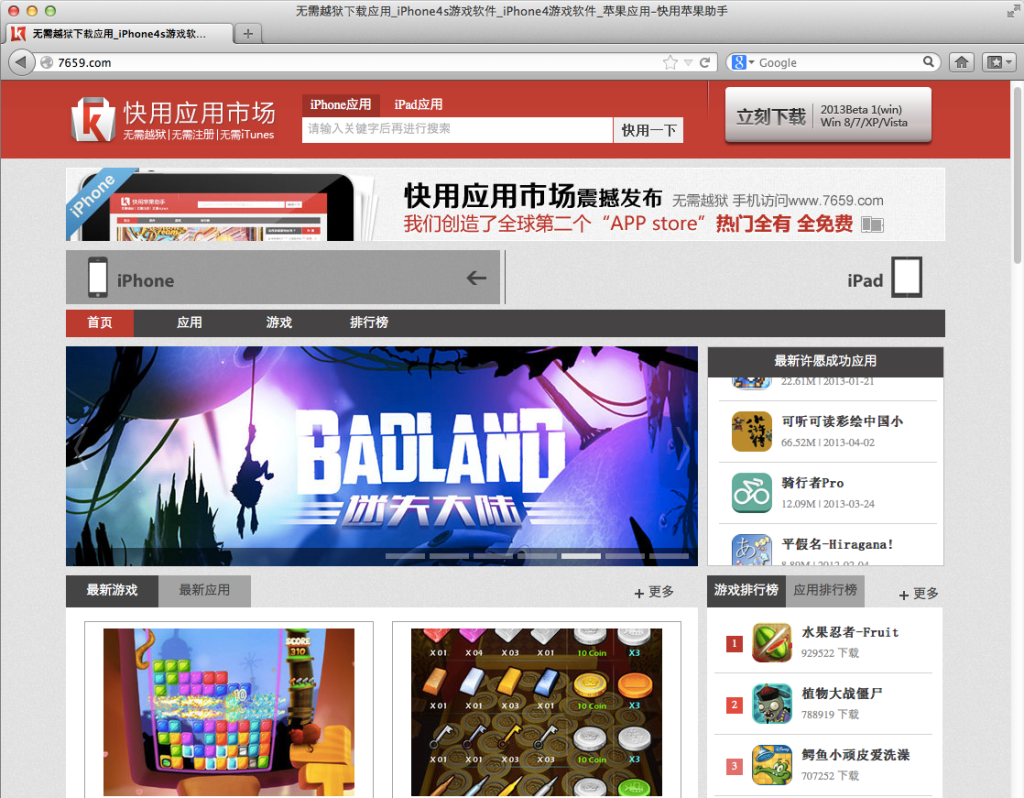 The site, which is only available within China unless you spoof your location via a proxy server, offers a wide selection of iPhone and iPad apps. In just a few moments, I found Final Fantasy V, a $16 iPad game; Badland, a newish $4 app; Le Vamp, a $2 game for iPhone and iPad, and many others.

Apple’s enterprise app deployment technology enables app distribution to an “unlimited number of iOS devices.” Essentially, enterprise app deployment enables corporations to function as their own app distributor, after getting a developer provisioning profile from Apple. That’s turned out to be a good thing for pirates in China, as over five million Chinese iPhone owners are currently using the site to find and install apps. And it seems to be a good thing for iPhone users, who are now getting free apps.

It is not, however, such a good thing for Apple or for the developers who expect to be paid for those apps.

Thanks to this ingenious enterprise strategy, iPhone owners in China do not have to jailbreak their phones in order to install pirated apps — as Taiwanese blog MicGadget puts it, essentially the same app is being distributed, again and again, with the same license ID. That’s exactly how Apple designed in-house enterprise apps to work, although it’s not likely they envisioned the technology being used this way. Jailbreaking, of course, comes with the increased risks of bricking your iPhone, boosting vulnerability to malware, and blocking updatability to new iOS software. 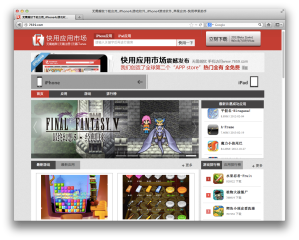 The site is provided by a front company called Kuaiyong, which appears to be owned by Beijing YouRanTianDi Technology Co Ltd. Though English-speaking users cannot connect with and use the service, Kuaiyong provides a short explanation of what it does for foreign Apple users — along with a justification for providing the pirate app store: the apparent difficulty of Apple’s iTunes:

In order for Chinese Apple fans to download applications securely, Kuaiyong developed its own method of giving users access to thousands of free apps without having to jailbreak their devices. Kuaiyong offers detailed descriptions of apps, free app download trial, IOS device management and visual and audio file backup system. IOS system backup and recovery features will also be released in the very near future.

Our goal has always been about bringing Chinese Apple users with quick, convenient and pleasant IOS experience. Since the introduce of Kuaiyong, the proportion of jailbreak in China has declined dramatically from 60% to around 30%. Kuaiyong will hold on to this goal in the future and we would like to see more support for Apple as well as Kuaiyong.

In other words, the company is clearly providing a valuable public service — and one that Apple should be thankful for.

That valuable public service, of course, is essentially like Amazon pulling a Kindle on Google: replacing the approved Apple iOS app store with a native Chinese service that would enable Chinese consumers to own and enjoy Apple hardware while cutting the cord on Apple’s services, app store, iCloud backup and recovery, and more. Essentially, everything that Apple uses to tie its customers into its services and to monetize them beyond the initial purchase moment.

It’s difficult to see how Apple can remain unaware of what’s going on here. Although apps are being installed — and presumably updated — via Kuaiyong, iPhones have historically phoned home to Apple for many things, including iCloud, location services (which led to privacy complaints and legal action), and, at least in early versions, the capability to see what apps are on a device and remotely kill them.

In all those communications, one would assume that Apple has built in provisions that it can check what enterprise provisioning profile exists on a device, and perhaps more. From there, it should be a piece of cake to find a stunning massive shadow “corporation” in China with five million employees, mysteriously scattered all over the country.

That’s something that Kuaiyong is at some pains for avoid, for obvious reasons. And if you visit 7659.com from outside China, you’ll see a note what seems to be a warning to avoid having your iPhone communicate with Apple in any way:

It is recommended that [you] do not use Apple ID or AppStore to reduce the frequency of repair.

I’ve asked Apple for comment multiple times but have not yet heard back.

One thing is fairly certain however: Apple will be looking for ways, or utilizing methods already available to it, to neutralize this threat and shut down this rogue app store. There’s a challenge in that, however: It’s in China. And China has not been a very friendly place for Apple lately, as state-sponsored media have had Apple in their sights, and Apple CEO Tim Cook was forced to apologize over the company’s warranty and support policies in a country where, according to a source I talked to, few companies accept returns of any products for any reason.

So the situation may require for some extreme delicacy on Apple’s part … and the solution cannot involve bricking five million Chinese consumers’ iPhones. That, more than anything else, would be corporate suicide in China.