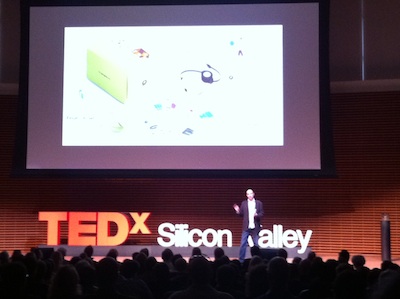 Wired editor-in-chief Chris Anderson kicked off today’s TEDx Silicon Valley event by offering his thoughts on why this year’s conference theme, “Living by Numbers”, represents a big improvement in our lives.

Anderson said that three big shifts have added up to what he calls “the new cybernetics” (though he admitted that he doesn’t expect the term to catch on) — namely, new ways that technology allows us to measure and improve our own behaviors.

The talk focused on the consumer impact of these changes, but it also implicitly pointed at some ways entrepreneurs might take advantage of these trends. In fact, you could see Anderson’s comments as a variation on LinkedIn founder and venture capitalist Reid Hoffman’s talk earlier this year on how linking data with social identity will represent the next wave in online innovation. (And in the next couple of weeks, I’ll be writing about the launch of at least one new startup that taps into these ideas.)

So what are the three shifts? First, Anderson cited a principle known as the Hawthorne Effect, which states that the act of observing someone’s actions encourages the observed person to improve their behavior. Now, he said, we have the opportunity to observe ourselves.

Which brings us to the second theme — the increasing ubiquity of cheap sensors that make these observations possible. Recalling analyst Paul Saffo, Anderson said that Moore’s Law, which refers to the ever-increasing computing power of chips, applies to sensors too, making them “smaller, cheaper, better.” For example, everyone in the TEDx Silicon Valley audience probably had an accelerometer with them in their smartphone.

“We now have the ability to measure the world around us,” Anderson said. “The question is: What we will do with that?”

Finally, the effect of the observations from these sensors gets amplified when the data is shared socially, and when services add things like game mechanics.

These trends are already affecting Anderson’s life, he said. He has a sleep monitor that tells him how he slept, so that he can see how choices such as when he goes to bed and whether he checks email first improve his sleep. His household weight scale is WiFi equipped, sharing everyone’s weight data with the rest of the family. That encourages the adults, especially, to keep control of their weight and helps them measure the effectiveness of different diet and exercise programs. And Anderson said he carries a fitness device in his pocket that shows how much exercise he’s gotten every day, pushing him to exercise if he’s had a relatively sedentary day.

These examples are all health-related, and while Anderson noted that they aren’t as reliable as a visit to the hospital or the lab, they offer other benefits. The key, he said, is “continuity of data.”

“My sleep monitor is not as good as a clinical sleep lab, but it’s with me every night,” Anderson said.