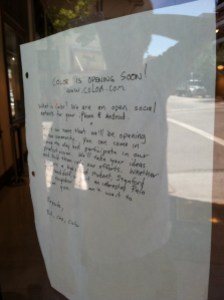 Remember Color? Back in March, the mobile startup caused a stir when it raised $41 million — an awfully big funding for a mobile app. Since then, little has emerged from the company beyond a handwritten note on the company’s Palo Alto headquarters.

The note, signed by Color CEO Bill Nguyen (founder of Lala, the music service acquired in 2009 by Apple), announced: “Color is opening soon!”

Many people who tried Color ended up confused about what it was supposed to do. Nguyen’s note tried to sort that out. Color is “an open social network for your iPhone and Android.” Got it? No? The website offers a bit more detail: “Simultaneously use multiple iPhones and Androids to capture photos, videos, and conversations into a group album. There’s no attaching, uploading, or friending to do.” Glad we cleared that up.

Back in April, we wrote that $41 million gives a company room to experiment, and this note indicates Color is experimenting. Just maybe not in the way you would imagine a company with that amount of money would.

The note says the company’s HQ will soon be open to the community, inviting passersby to network the old-school way. “You can come in during the day and participate in our product vision,” the sign reads. “We’ll take your ideas and build them into our efforts.”

Certainly a grand opening such as this calls for a slightly larger piece of paper (maybe even one without a three hole punch) and maybe something typed, but the quickly scrawled handwriting of CEO Nguyen conveys an urgency and down-home, neighborly appeal. It also got our attention.

Color’s funding, from Sequoia Capital, Bain Capital, and Silicon Valley Bank, got lots of people talking and wondering how an app could raise so much money. Our dearly missed Anthony Ha noted that while the idea was promising, he was confused about what exactly to do with the Color app, “especially when there was no one using the app with me.”

Maybe Color’s new experiment will not only get more people talking about Color, but using it too.

Update: The note has been posted on Color’s doors since March.