In the mobile OS wars, Google’s Android kept the U.S. crown with 53.3 percent, moving up 0.2 percentage points year over year, while Apple held second with iOS, also moving up the same 1.3 percentage points as a smartphone maker. Microsoft’s Windows Phone dropped 0.5 points to 2.9 percent while BlackBerry OS halved its share from 1.8 percent to 0.9 percent. 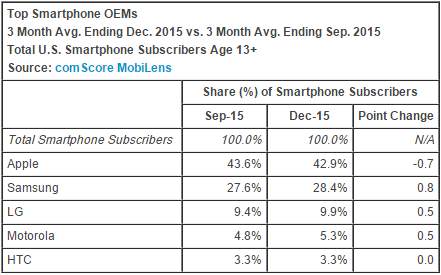 Over the last three months of the year, Apple lost share while Samsung capitalized. As we already mentioned, though, Apple actually fared better when looking across the whole year. Everyone else in the U.S. market is still very far behind, though LG almost managed to hit double digits. The bigger changes will likely come when January’s figures arrive, as that’s when the impact of holiday sales will become apparent.

On the software side, Google ended 2015 very strongly. In December, Android was the undisputed winner once again, while Apple’s iOS held onto second without issue: 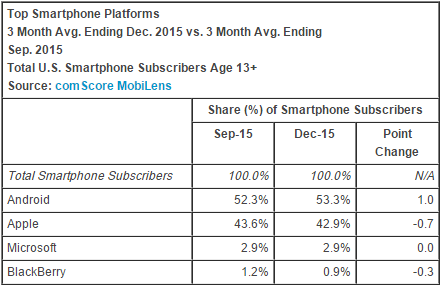 Microsoft’s Windows Phone failed to gain traction and BlackBerry managed to hit a new low. BlackBerry OS fell below 1 percent, a number it hasn’t seen in U.S. for than a decade. Given its Android ambitions, however, this is hardly surprising.

At the end of 2014, the Android-iOS duopoly in the U.S. had hit 94.7 percent market share. At the end of 2015, that figure rose to 96.2 percent. We expected that something would give in 2015, but Windows 10 Mobile was the only real hope for a challenge, and it has been plagued with delay after delay, among other issues. Right now at least, it doesn’t look like anything in 2016 will be able to break Apple’s and Google’s mobile stranglehold.