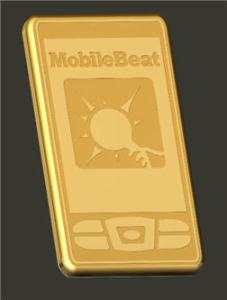 Well, it’s all over but the drinking. Our panel of experts has selected the best companies presenting at MobileBeat 2008 today in Sunnyvale. Since we didn’t know the winners ahead of time, the Tesla Awards (pictured left, named for inventor Nikola Tesla) weren’t engraved yet, but the winning executives did get a warm handshake from Accenture‘s Lars Kamp, who presented the awards.

Best CEO: Dan Shapiro of Ontela, which offers easy-to-use photo-taking and sharing technology that lets you upload media from cameras to PC. The company sells white-labeled product to carriers.

Biggest blunder: Mig33. Update: Just to be clear, this is meant to be a light-hearted award, and a celebration of a company that’s learned from its mistakes and gone on to be successful. That’s certainly the case with Mig33. I can’t speak for our judges, but when I interviewed Mig33’s chief executive Steven Goh before the conference, he said the company’s biggest blunder was its initial product, a failed SMS offering. Once the company relaunched its service with beefed-up features, however, things started to take off.

Boldest idea: Skydeck, which lets you analyze your phone calling behavior based on bills you get from your phone carrier. For one thing, it can show you the strength of your friendships.

The winners were selected from the companies that we identified as the Top 10 at MobileBeat. The only exceptions were “best CEO” and “boldest idea,” for which all top 30 companies were eligible. Attendees also voted on a “people’s choice,” namely a company in the 30 that should join the top 10 presenting on stage. The winner was Radar, a company that offers easy photo-sharing and commenting on all phones, and boasts over one million users.