Whether it’s named or used anonymously, Corning’s Gorilla Glass has been a key ingredient in smartphones since the first iPhone — except for folding phones, where the screens are covered in flexible plastic. The reason: Corning says that it’s still working on flexible glass that will meet the specific needs of smartphone users, a development process that could take a couple of years.

Though it went largely uncredited as a development partner for the first iPhone, Corning’s work to create a smartphone screen up to Apple’s standards was down to the wire. In fact, the iPhone’s switch from a plastic screen cover to glass was announced well after the device’s memorable on-stage debut. Over the years, the partnership yielded a series of scratch- and oil-resistant glass panes that could be made harder, thinner, more flexible, or shatter-proof — except not all at the same time.

For years, Corning was working on a thinner solution — called Willow Glass — that was envisioned specifically for the curved bodies of future wearables. But, according to Wired, the company’s now trying to create an ultrathin, highly and repeatedly bendable glass suitable for folding devices. Unlike plastic, which will eventually develop permanent and visibly distorted creases in its folding zones, the glass will remain in its original shape.

The major challenge now is to simultaneously get the glass to a tight bend radius while enabling it to withstand drops — Corning says it can do one or the other at this point, but not both. For now, the glass can bend to a 3-5mm radius around 200,000 times, but not survive a serious drop event. The company aspires to create a 0.1mm thick glass that can bend to a 5mm radius without breaking. 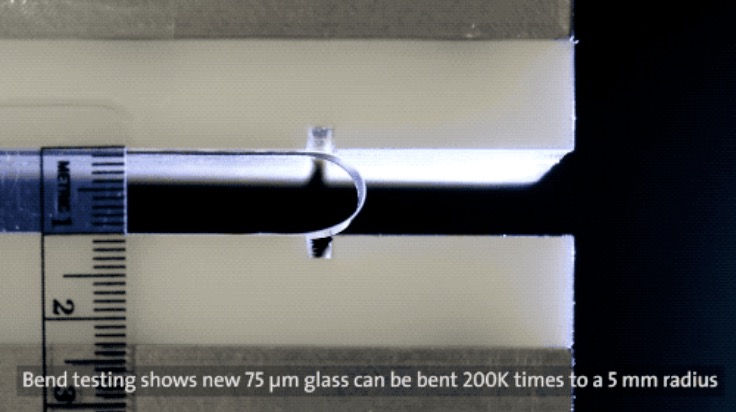 Whether that radius is tight enough for next-generation foldables remains to be seen, but the inability to survive a drop would be a non-starter for smartphones and tablets  — especially for users of premium devices. Recently announced plastic-screened Samsung and Huawei foldables are slated to hit the market at $2,000 or more, insanely steep prices even for devices that could survive three or four years of normal use.

As the Wired report notes, the bigger problem for plastic-screened devices is that they won’t look as good as the glass smartphones customers are accustomed to. That was the reason Apple was willing to hold out until the last minute for a viable glass solution: The color transmissibility and scratch resistance of glass are visibly superior to plastic. Samsung and Huawei limited media handling of their devices at their launch events and Mobile World Congress booths to obscure these differences, but early foldable phone customers will certainly notice them and may well wish that they waited for later models with next-generation glass.