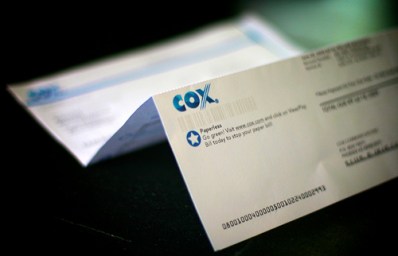 Cox Communications, the third-largest cable provider in the US, announced today that it’s launching a mobile phone service that it will bundle with its cable and internet service, Bloomberg reports.

The cellular service is launching today in Orange County, California; Omaha, Nebraska; and Hampton Roads, Virginia. The company is hoping to take on phone companies like AT&T and Verizon who have been steadily encroaching on Cox’s TV market share.

24 percent of its customers said they would switch to its mobile service in May, the company said.

Cox will use Sprint’s 3G network initially, but the company is also working on a network of its own, according to the company’s vice president of wireless, Stephen Bye. The company will offer wireless service only in areas where it operates — it has no plans to become a national carrier. Its monthly contracts will start at $39.99, and the company will offer free calling to other Cox cellphones and landlines.

Cox will offer an array of Android handsets initially, including the HTC Desire, Motorola Milestone and LG Axis. The company will expand its offering based on customer demand, according to Bye. The company will sell the phones at its Cox Solutions Stores.

The news makes Cox the first cable company to pursue a wireless service offering, as well as the first to offer a “quadruple play” of services (wireless, TV, internet, and landline phone). Cox and other cable companies have a long history of joint ventures to enter the wireless business — often with Sprint as their partner — but none seem to have taken off as planned.