Crossbar announced today a new kind of memory chip that can replace flash memory, one of the fundamental building blocks of digital electronics, in a number of of applications. 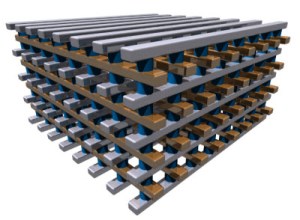 The Santa Clara, Calif.-based chip startup is debuting Resistive RAM, a technology that can store a terabyte of data on a single chip that is smaller than a postage stamp. It can access that data 20 times faster than the best breed of flash memory. These features could prove disruptive to the $60 billion dollar flash market that is at the heart of the $1.1 trillion electronics market. Flash is used in everything from iPhones and tablets to digital cameras.

Crossbar says it will enable a new wave of electronics innovation for consumer, enterprise, mobile, industrial, and connected device applications. Because of this potential, Crossbar has had success raising money. It has raised $25 million from Kleiner Perkins Caufield & Byers, Artiman Ventures, and Northern Light Venture Capital.

The company can put a terabyte of data, or about 250 hours of high-definition movies, on a single chip that is smaller than the equivalent flash memory chip (as pictured at top). It could also perform its storage functions at 20 times lower power, extending the battery life of devices using it to weeks, months, or years. Crossbar also says it has 10 times the endurance of NAND flash chips that it could replace.

The company has built a working memory array in the standard manufacturing plant of one of its partners. That’s a big milestone that shows the new technology won’t require a wholesale change in manufacturing technology.

“What is unique about this is that we have been able to get to manufacturing in just three years,” said George Minassian, the chief executive of Crossbar, in an interview with VentureBeat. “It is a technology that is easy to manufacture.”

Of course, it is always difficult for a new technology to replace an existing one that’s operating on a huge economic scale. Flash memory chips may not be as fast, but if flash memory chip makers can build more advanced factories and spend more money on designs, they could try to fend off Crossbar as it goes through its process of trial and error before it hits the market.

Like flash, RRAM is nonvolatile, meaning it can store data permanently, even when it has no power. The Crossbar design uses a three-layer structure that can be stacked in three dimensions. The more vertical the structures on the chip, the more terabytes can be stored on that chip.

“Today’s nonvolatile memory technologies are running out of steam, hitting significant barriers as they scale to smaller manufacturing processes,” said Minassian. “With our working Crossbar array, we have achieved all the major technical milestones that prove our RRAM technology is easy to manufacture and ready for commercialization. It’s a watershed moment for the nonvolatile memory industry.”

Wei Lu, a professor at the University of Michigan, invented the technology, and it came to the attention of Kleiner Perkins. At the venture capital firm’s bidding, Minassian and his partner studied the technology for several months, and they were impressed. They negotiated a license and founded the company in 2010.

“The specs were so good [that] we knew that there must be more to it,” Minassian said. 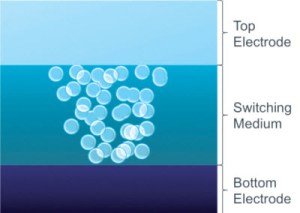 “The memory market is looking to new technologies to take over once flash reaches its scaling limit,” said Jim Handy, the director at research firm Objective Analysis. “Crossbar’s impressive progress in the development of a manufacturable RRAM gives a big boost to this popular alternative memory.”

Yatin Mundkur, a partner at Artiman Ventures, said the production of the first chip moves the company one step closer to commercialization. Crossbar believes it can write data to its chip at 140 megabytes per second, compared to 7 megabytes a second for flash. Read performance is 17 megabytes per second, with a random read latency of 30 nanoseconds.

The company has just 20 employees. It plans to create its own chips and sell them on the market, but it will also license its technology to system-on-a-chip vendors that would combine RRAM with other components on the same chip.

With Crossbar chips, mobile phones and tablets would have significantly faster storage, better playback, and smoother backup and archiving. On the enterprise side, vendors could create solid-state drives and cloud computing devices in data centers. RRAM could also be used in the “internet of things” thanks to its better battery life and lower costs. It could work in applications such as smart meters and thermostats. Minassian said RRAM could also make wearable computers such as Google Glass much more functional.

The Crossbar memory cell is based on three simple layers: A nonmetallic bottom electrode, an amorphous silicon switching medium, and a metallic top electrode. The resistance-switching mechanism is based on the formation of a filament in the switching material when a voltage is applied between the two electrodes. That is the basic structure of a memory cell, which is repeated over and over again in order to store the ones and zeroes of digital information.

Sherry Garber, a founding partner at analyst firm Convergent Semiconductors, said, “RRAM is widely considered the obvious leader in the battle for a next generation memory, and Crossbar is the company most advanced, showing a working demo that proves the manufacturability of RRAM. This is a significant development in the industry, as it provides a clear path to commercialization of a new storage technology, capable of changing the future landscape of electronics innovation.”

Crossbar said it has filed 100 patents, with 30 already issued.

Michael Yang, a senior analyst for memory and storage at market researcher IHS, said, “Ninety percent of the data we store today was created in the past two years. The creation and instant access of data has become an integral part of the modern experience, continuing to drive dramatic growth for storage for the foreseeable future. However, the current storage medium, planar NAND, is seeing challenges as it reaches the lower lithographies, pushing against physical and engineering limits. The next generation nonvolatile memory, such as Crossbar’s RRAM, would bypass those limits, and provide the performance and capacity necessary to become the replacement memory solution.”