With their excitement for wearable technology, consumers have opened the door to all kinds of technological intrusions. But is smart jewelry going to be a dumb idea?

Cambridge, England-based chip maker CSR, best known for its wireless chips, will test the limits as it fuses fashion and function with a new line of Bluetooth Smart jewelry. The connected jewelry can connect to other mobile devices so that the wearer can customize the color and brightness to suit their mood for the moment or coordinate with a particular outfit. The company is introducing the jewelry at the 2014 CES tech trade show in Las Vegas this week.

The pendant-style necklaces have the integrated electronics to perform a range of functions, like alerting a user to the fact that they have received a notification on a smartphone.

CSR said it surveyed consumers on wearables and found that 72 percent believe that wearable technology devices must look good, and 67 percent admit that it is important that the wearables fit with their own personal style.

“Many of the wearable technology devices hitting the shelves today offer great features but don’t take into consideration that consumers want beautiful, cutting-edge devices that complement their personal style,” says Paul Williamson, the director of low-power wireless at CSR. “If wearable technology is to reach its potential it needs to appeal to more than just technology lovers. Devices like these connected pendants will help wearable tech go mass market.”

Boutique jeweler Cellini helped designed the jewelry to work with CSR’s Bluetooth Smart chip, the CSR1012. That chip is engineered for wearable technology, as it can connect the jewelry to a smartphone by using a small amount of power drawn from a small lithium battery. CSR’s processor in the necklace supports Apple’s notification center service, a feature in iOS 7 software that enables a peripheral to access notifications on an iOS device via Bluetooth. CSR will also demo Android apps that enable a user to set the color and patterns of the jewelry.

“Although these prototypes have been designed to alert users to notifications on their smartphones, they could be used for many other things,” said Williamson. “Developers could use the same printed circuit board (PCB) to design more aesthetically pleasing activity monitors. They could even integrate scent capsules to allow users to release a spray of their favourite fragrance at certain times of day. We wanted to give our customers a glimpse of what they could do with this technology. The possibilities for truly wearable technology devices are endless and we’re looking forward to seeing what they develop with it in the future.” 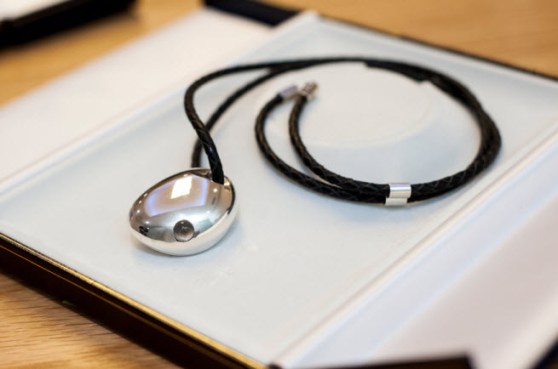