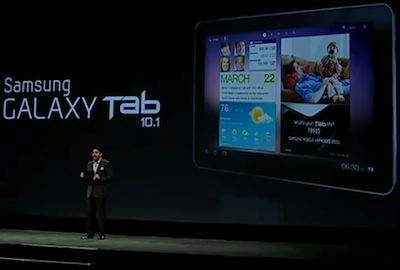 Samsung unveiled the next versions of its Galaxy Tab tablet computers at the CTIA Wireless 2011 conference — an 8.9-inch and a 10.1-inch tablet that are aesthetically comparable to Apple’s iPad.

The actual build of each tablet is solid. After playing around with the 8.9-inch and 10.1-inch tablets, I liked how each felt — they were both light, but quite sturdy. Both devices are thinner than Apple’s iPad. But both devices still suffer from the same nagging complaint I have with the 7-inch Galaxy Tab — the interface just seems a little slower than some of the other tablets on the market. Not catastrophically slower, but just a tiny bit.

From what I can tell, the home screen and the rest of the interface lagged behind my motions by about a tenth of a second. Normally that’s something that I would ignore. Except the iPad, Research in Motion’s BlackBerry Playbook, and HP’s new WebOS-powered tablet, the TouchPad, all feel like they have a one-to-one transition whenever I make any kind of motion on the device. It’s not a massive problem, but it’s annoying.

The delays were still present even though the devices were running the latest version of Google’s mobile operating system, Android. Honeycomb, or Android 3.0, is supposed to be optimized for tablet usage and make Android tablets more competitive with the iPad 2 — as well as stay ahead of upcoming tablets like the Playbook and TouchPad. While the interface certainly felt more natural, that nagging tiny delay was still present. Even the Motorola Xoom, which also runs on Honeycomb, still felt like it ran a bit more smoothly than the Galaxy Tabs.

The new models of the Galaxy Tab will run Honeycomb even though Google said the operating system would be delayed for a bit. I’m sure there are a lot of ways to optimize the tablets and make them run more smoothly. But from the prospective of a first-time buyer and someone who isn’t entirely Android-savvy, I have to say that it would be enough to keep me from buying the new tablets.

Both the 10-inch and the 8.9-inch tablets are successors to Samsung’s original 7-inch Galaxy Tab, which currently retails for $250 with a two-year data contract, or between $500 and $600 off-contract. Samsung hasn’t yet announced how much it will charge for the Galaxy Tab 10.1. You can see a full presentation that has extensive details about each device in the video presentation below.