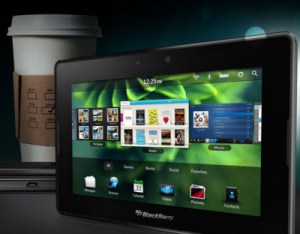 Tablet computers will one day completely replace laptops as the standard-issue workplace computer — at least, if some of the top tablet and phone manufacturers in the world have their way.

A panel of executives at top phone manufacturers came to agreement on this forecast at the CTIA Wireless 2011 conference in Orlando, Fla.

It’s a logical transition for a lot of companies. Most major enterprise companies like Salesforce offer a tablet-friendly mobile-app version of their desktop software. Many companies have already begun their transition to tablets for field work and other corporate necessities. About 80 percent of the largest companies in the world on the Fortune 100 list have already begun testing or deploying applications for Apple’s iPad tablet.

“We want each company to hand out 50,000 tablets instead of 50,000 laptops,” said Omar Khan, chief strategy officer of Samsung Mobile. “We want them to have an affinity to buy tablets for email and other field projects.”

There are still a few hurdles to jump over before Khan realizes his dream, though. The tablet market is still nascent and there are a number of security issues surrounding Android tablets because the application development ecosystem is much more open than Apple’s closed development system. Applications developed for the iPad, for example, typically don’t end up on the App Store but still have to go through a digital signing procedure that Apple oversees before they can be distributed to employees in the company.

“Android is becoming more enterprise-ready every day, we’re all working on hardening android to make sure the security is there,” Khan said. “We want to make sure So we can address the enterprise so it can become a true laptop replacement.”

Just about every major phone manufacturer has begun developing a tablet computer. Samsung has the Galaxy Tab tablet. Motorola has the Xoom despite the company’s complete devotion to smartphones as the universal enterprise tool, said Alain Mutricy, senior vice president of portfolio and device product management for Motorola. Both run on Android, which is due for a hefty upgrade when the tablet-optimized Honeycomb operating system comes out.

Research in Motion has the BlackBerry PlayBook, a 7-inch tablet running its new tablet operating system that will come out in mid April at around the same price point as the iPad. But that device is geared toward both consumers and enterprise users, while its line of phones has traditionally catered to the powerhouse executives and enterprise customers, said Jeff McDowell, senior vice president of business and platform marketing for Research in Motion.

Android devices only account for around 30 percent of enterprise activations, while Apple’s devices account for 65 percent when excluding Research in Motion’s dominating presence in the enterprise space. Android’s growth in the enterprise space has also stalled a bit while Apple’s is still growing, according to the same report. Both of those numbers are dwarfed by Research in Motion’s 55 million customers — a large chunk of whom are business customers.