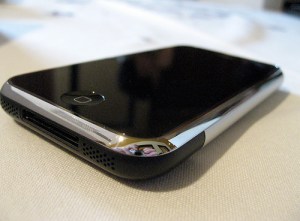 If the name “Cyber Monday” makes you think of your shameful AIM exploits in the late ’90s, a new trend may make your day.

According to data from eBay, PayPal, IBM and GSI Commerce, mobile activity spiked yesterday as early holiday shopping took off.

Traditionally, the Monday after Thanksgiving has been a heyday for online retailers. But with more and more consumers accessing the web from smartphones and tablets, a fair amount of Cyber Monday shopping is going down via mobile channels.

Today, eBay Mobile stated U.S. shoppers spent two and a half times more on the online auction and shopping site’s mobile channel than they did on Cyber Monday last year.

According to data from IBM, Cyber Monday saw an 10.8 percent in mobile visitors to ecommerce sites, up from 3.9 percent in 2010. And it wasn’t just empty traffic; mobile sales were up, too, from 2.3 percent last year to 6.6 percent yesterday.

An eBay spokesperson said the company “expects that mobile shopping will remain popular with shoppers throughout this holiday season.

“As we are apt to say, both consumers and retailers are set to benefit from the convenience provided by shopping via mobile anytime, anywhere.”

Overall, Cyber Monday sales were expected to reach a record $1.2 billion, this year, with mobile sales doubling year over year. The number of mobile shoppers rose from 3.6 million consumers in 2009 to 7.3 million in 2010 and an estimated 17.8 million this year.

“A new retail is emerging where online and offline shopping have merged due in large part to mobile technology and its continued growth,” said Steve Yankovich, eBay’s vice president for mobile, in a statement today.

“eBay… is enabling this new commerce landscape by helping holiday consumers shop anytime, anywhere, and by being the partner of choice for retailers and sellers of all sizes.”

And since we know y’all want to know the Android/iOS split, here’s the skinny from IBM: The iPhone and iPad were number one and number two for driving mobile retail traffic. iPhones accounted for 4.1 percent of traffic and iPads served up 3.3 percent. Android delivered 3.2 percent.