Decentralized applications (dApps) are one of the biggest potential uses of blockchain technology, as they open up whole new options for consumer- and business-focused products with functionality that hasn’t been seen before.

Towards the end of 2018, my team set out to investigate and study the state of dApp development in the hopes of deciphering the current state of this crucial market. We initially aggregated a list of 1,624 dApp development projects but only managed to find contact information for 900 projects. Of this pool, 160 projects filled out our full 40-question survey. Our goal was to separate the facts from speculations and rumors on what’s happening in the dApp market. We wanted to know how many active dApp projects there are, what they’re up to, and what challenges they face when building their dApps.

What we found is that the dApp community is young and enthusiastic, but it faces a number of immediate and longer term challenges. Four main points of interest emerged from our research:

As the hype subsided throughout 2018, though, dApps were being launched. Despite harsh market conditions almost three quarters (72 percent) of the projects that completed our survey were started in 2018, and 41 percent were started in the last six months.

In regards to funding, 2017’s dApps were mainly self-funded (38 percent) or funded by token sales (31 percent), while VC invested projects make up only 24 percent of our responders. In 2018, the number of self-funded dApps doubled to nearly 68 percent, with 47 percent of teams having 3-5 people and only a small portion received funding through token sales (10 percent) or VC investment (16 percent).

What this tells us is that dApps are made up of smaller teams that can launch an idea quickly and with minimal funding, much like the early days of mobile app development, where a small team could bootstrap a great consumer application idea, build a user base, then raise funding. 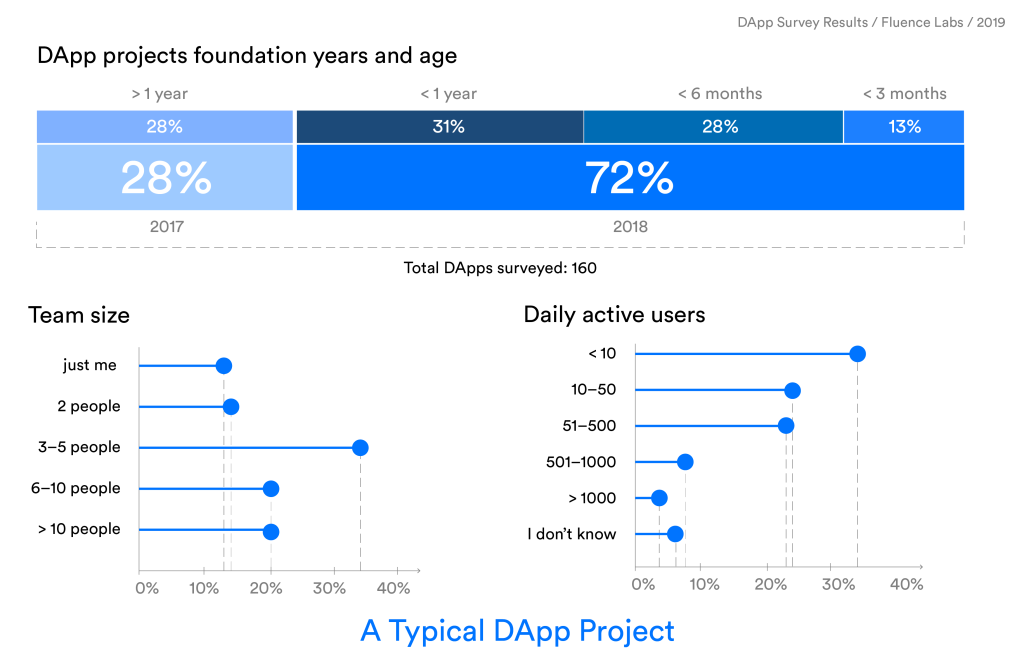 2. DApps are relying on ‘centralized’ solutions … for now 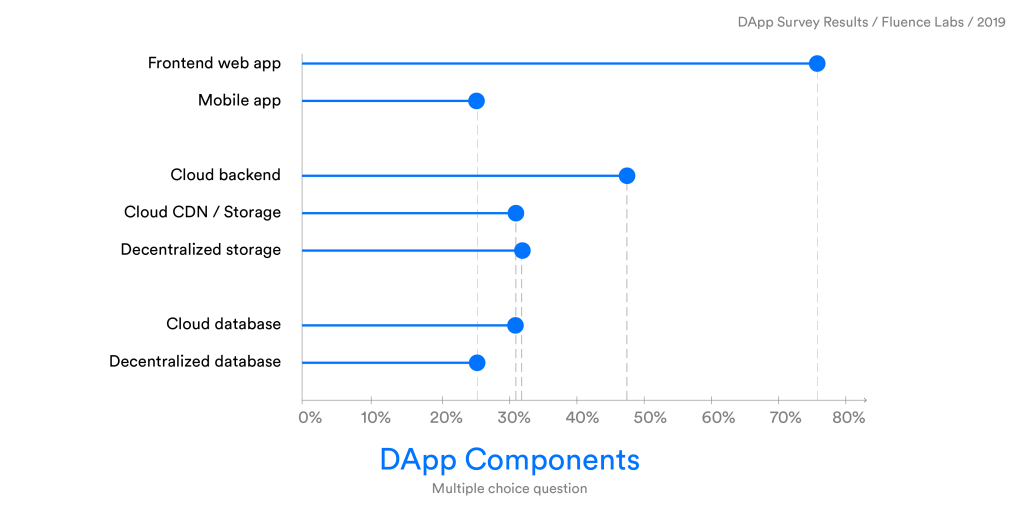 3. User onboarding and education are by far the biggest hurdles

The number one problem dApp developers reported was an overall low amount of users in the crypto/blockchain world. Nearly 10 years after the start of the cryptocurrency world with the launch of Bitcoin, accessibility and usability still remain the largest obstacles to growth. Activities that might seem intuitive to the hardcore crypto fan, such as creating a wallet or saving your private key (password), are major hurdles to the average user. The fact that there is no password recovery option is an issue for most consumers, and crypto illiteracy remains stubbornly high.

This issue is so prevalent that 78 percent of respondents said it was the major roadblock to adoption of dApps. Creating a wallet, purchasing currency, and understanding private keys, transactions, and gas are massive barriers to user growth.

“Getting them started with a wallet and explaining that they’ll have to “sign in” to that wallet using widely varying software, some of which has a high incidence of fraud and failure, and that they can’t ever lose (or change!) that password or else they’ll permanently lose access to everything. That’s a hard sell without some seriously good onboarding tools,” one respondent wrote. 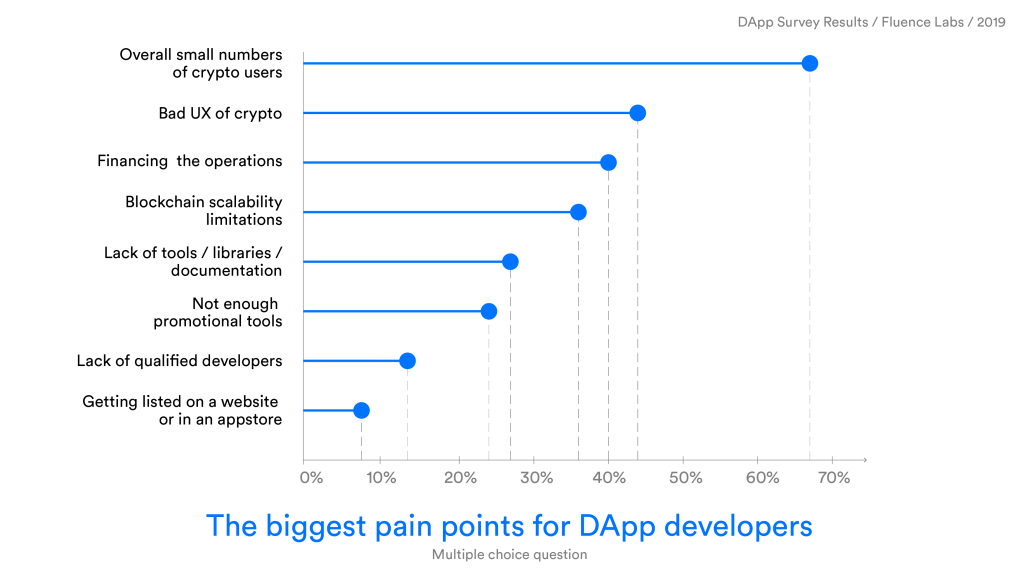 4. Many dApp makers are betting on games

We found a surprisingly high prevalence of gaming-focused dApp projects among our respondents. Of the returned surveys, 27 percent of projects said they are focused on some form of gaming based on blockchain technology. While this might not coincide with the dreams of blockchain enthusiasts, it’s very good news for the short-term growth of the industry. Worldwide, gaming is a billion dollar industry and is a sector that could potentially see the highest growth rate given current usership. Rather than hope the general population will wake up one day and decide they’re ready to try out blockchain, it makes sense to bet that users will enter the blockchain space due to familiarity with an application. And given there are millions and millions more video gamers and gamblers than there are lawyers and financiers, games are the most familiar of apps.

Overall, our findings spell more good than not for the dApp industry. While we primary asked survey takers about the technical challenges, the overall sentiment seemed to be that growth will come once issues like UX are improved. And many projects are getting closer to solving this issue. Crypto literacy is not a pipe dream but a potential reality if developers put proper attention and resources toward making dApps usable to blockchain newcomers. In order for the dApp market to achieve a higher rate of adoption, these projects must focus on the customer journey and the user experience. After all, looking at the computer industry (or even the smartphone industry), it wasn’t until UX improved that we saw massive growth from everyday users.

For more detail, you can view our complete dApp Survey Results 2019.

Evgeny Ponomarev is cofounder and CEO at Fluence Labs, a company working on a decentralized data processing network. He previously worked on products at 2GIS and co-organized the CodeFest developers conference. He is an early crypto evangelist and mined his first Bitcoin in 2011.