If you’re like me, you look at screens all day and late into the night. Your eyes could probably use some relief. Fortunately, an increasing number of applications offer dark themes, which display text, images, and videos on top of dark backgrounds. At least for me, they’re easier on the eyes in the nighttime, and even in the daytime.

While the iOS operating system does have an Invert Colors option (Settings > General > Accessibility > Display Accommodations) that forces apps with a light background to go dark, iOS is lacking a full-blown dark mode that keeps photos and other content looking the way it should. So app-specific dark themes are generally a good way to go at this point.

Here’s a list of 25 apps that currently ship with dark themes. They’re all free, unless otherwise noted. 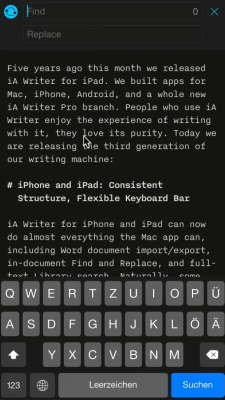 This is a simple writing app with support for Markdown formatting, Word documents, the WordPress content management system, and Dropbox sync. It costs $4. 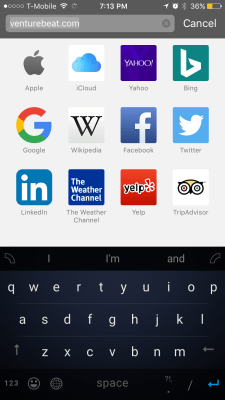 Above: Word Flow for iOS.

This was originally the default virtual keyboard that Microsoft shipped with Windows Phones. Microsoft brought it to iOS in April. 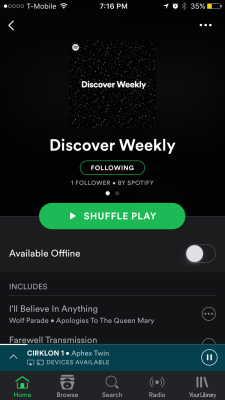 You may have heard of this music streaming app. It’s easy to overlook that the default user interface, on mobile, web, and desktop, is a dark theme. 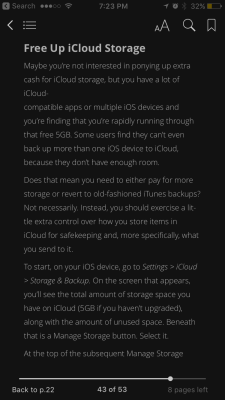 Apple has offered a dark theme in its standard-issue book-reading app since 2011. 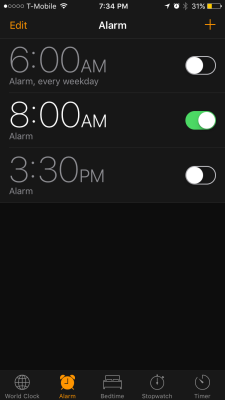 Apple has refreshed the look of its default Clock app for iOS 10. It now uses a dark theme by default. 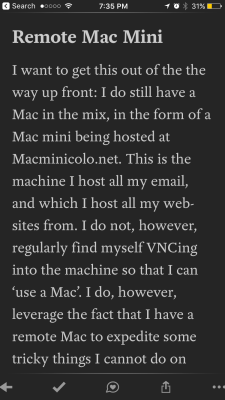 The dark theme in this read-it-later app is so good — it’s what inspired me to put together this article in the first place. I love to read longer stories in Pocket while in bed, before going to sleep. Above: The new look for Pocket Casts.

A dark theme became available in this podcasting app from independent developer Shifty Jelly just a few days ago. 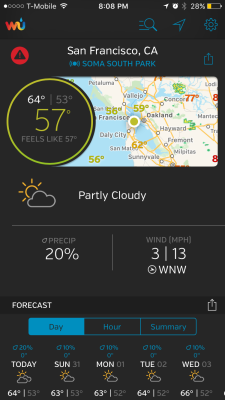 This app is more sophisticated than the default iOS Weather app, with interactive maps, radio and video feeds, and health information. 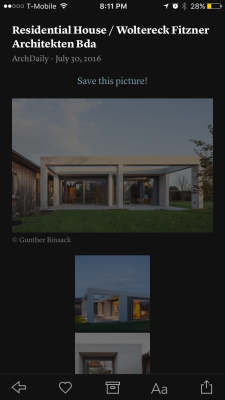 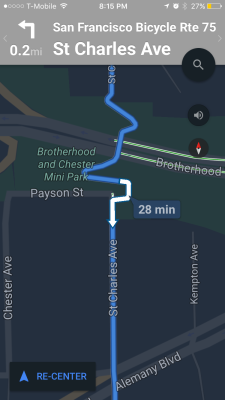 When you’re driving at night or travel through a dark area, like a tunnel, the standard mode of this map app goes dark. But you can actually enable the dark theme for the entirety of your trips. When you’re in the middle of a trip, tap the three dots on the bottom right, tap “Navigation settings,” and hit the night option in the “Color scheme” section. 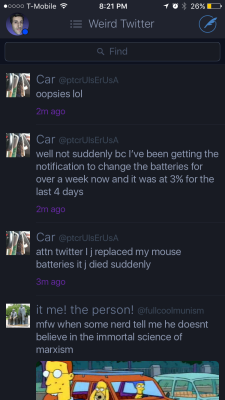 This free third-party Twitter client from The Iconfactory has some premium advanced features, including an ad-free experience. 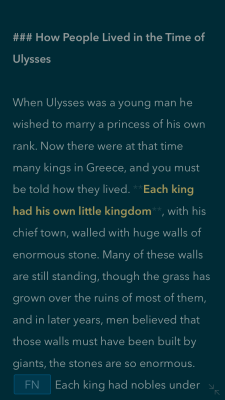 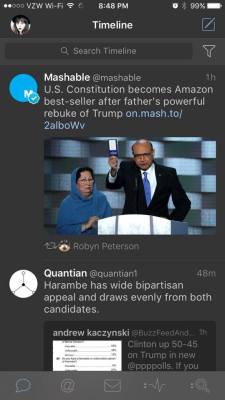 This premium Twitter client from third-party developer Tapbots offers a Stats view so you don’t need to check Twitter Analytics so frequently. It costs $10. 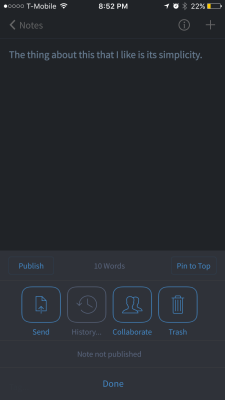 WordPress company Automattic acquired Simperium, the company that built this note taking app, in 2013, and has thankfully kept the app alive and up to date. 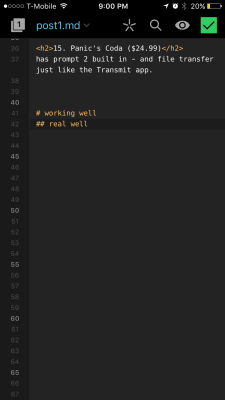 Development studio Panic made a premium Coda app that includes a text editor, file transfer capability with support for Amazon S3, a terminal, and even a playground for experimenting with JavaScript code. It costs $25. 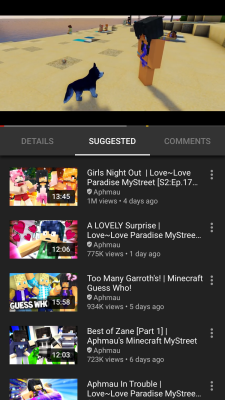 Google introduced this live game streaming app last year, following the rise of Twitch and its acquisition by Amazon in 2014. 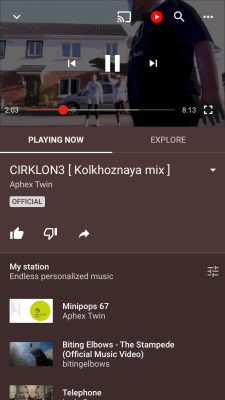 Google launched the YouTube Music app last year, as a place to discover music that’s already available on YouTube. From this app you can upgrade to the YouTube Red subscription service with audio-only mode, background play, and offline support. 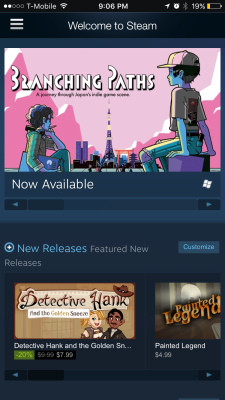 With its dark blue background, the iOS app from gaming platform Steam looks a lot like the desktop version. And that’s a good thing. You can chat with friends, browse the store, and peruse your library. 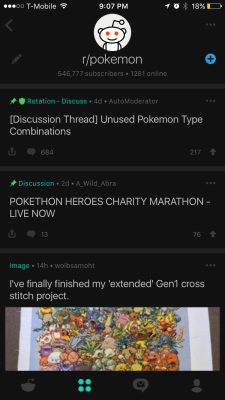 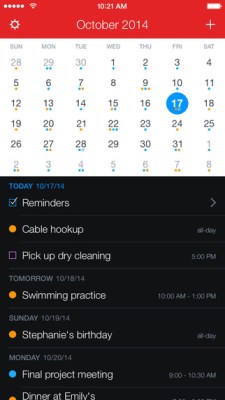 This app from developer Flexibits has dedicated iPhone and iPad versions, for $5 and $10, respectively. It won an Apple Design Award in 2015. 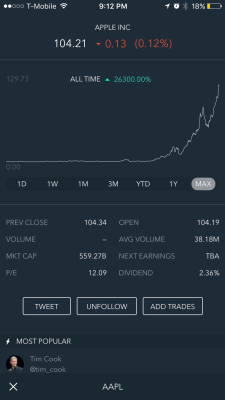 If you’re not happy with Apple’s pre-installed Stocks app, which itself has had a dark theme since iOS 7 came out in 2013, the Portfolio app from developer Mazuma Labs is worth checking out. You can import trades from Google Finance and Yahoo Finance, and it can send you notifications for price movements, earnings, and news. 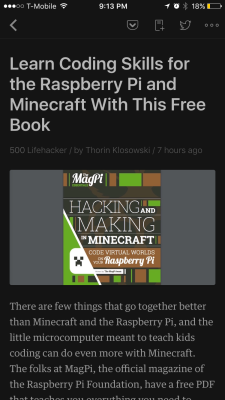 This RSS reader picked up lots of usage after Google announced that it was killing Google Reader in 2013. And the Feedly iOS app has had a dark theme this whole time. 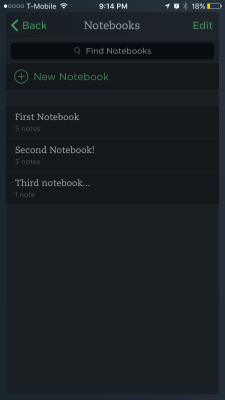 This note taking app has a dark theme, but it’s not available when you’re viewing or editing files, or when you’re using the Work Chat feature. 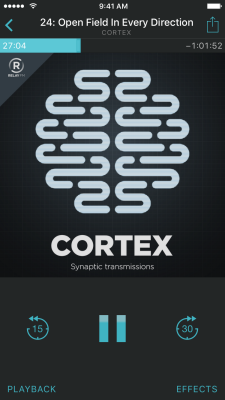 This 2-year-old podcasting app offers a dark theme as a “Patron” feature. That is, you can get it if you pay $3 for three months, $6 for six months, or $12 for a year of support from the app’s maker, Marco Arment, the founder of Instapaper and a cofounder of Tumblr. 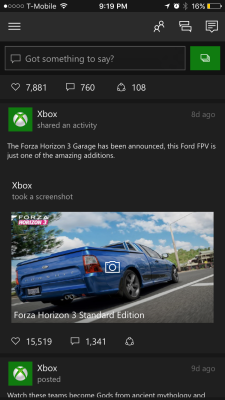 This app from Microsoft lets you check updates from friends, exchange messages, browse the Xbox Store, check your achievements, and interact with content on your Xbox One.