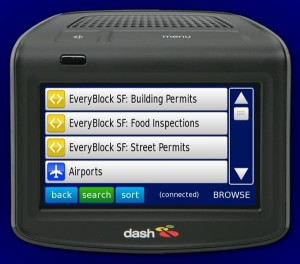 Dash Navigation has laid off two thirds of its employees and plans to stop making the hardware behind its Dash Express car navigation devices. That’s a shame. Chalk it up as a victory for commodity products, and a loss for innovation. It’s a reminder that no matter how clever your inventions, you can still lose if you don’t get the business model right.

Sunnyvale, Calif.-based Dash sold its GPS device with Web 2.0-like features for $299. It charged $12.99 a month in subscription fees so that people could get the best features such as real-time traffic reports. Dash relied upon its community of users to deliver data on traffic conditions, which were then shared with everyone. Only the subscribers could access the best applications. I was a big fan of the way it used crowdsourcing, or the intelligence of its crowd of customers, to provide more accurate traffic data. But cheaper devices, i.e., commodity global positioning system devices that sell for $100 or less, have apparently won the day.

Initially, Dash aimed at selling the device for $600. It cut that to $399 in the spring, and then $299 in the summer. Meanwhile, commodity GPS devices were flying off the shelves at $99 each. Competitors included Garmin, Mio, Magellan, Navigon, Sony and TomTom. One of the worst things that Dash did was delay its launch, allowing time for rivals to catch up with OK-quality real-time freeway traffic results. Dash had better data from its drivers on smaller roads, but that apparently wasn’t enough to justify its higher price.

The start-up, backed by Sequoia and Kleiner Perkins, isn’t shutting down. Rather, it will now try to license its technology to other GPS makers. The company raised $71 million, but it apparently wasn’t enough to get Plan A off the ground. Paul Lego, chief executive, will resign and is being replaced by chief operating officer Rob Currie. He told GigaOm that the company will try to get its technology into cell phones and other devices made by former rivals.

All kinds of things could have happened here. Maybe the VCs shut down further investments because of the slow sales and the current downturn. The device didn’t make it into stores, selling online only through Amazon and other websites.

For the future, it remains to be seen if the company can succeed by licensing its technology to others. Dash already has an applications programming interface for developers. The company will focus on engineering and support with its 30 remaining employees.