If you’ve ever forgotten to pick up your credit card from a bar after a night out, you know how frustrating that experience is.

New York City-based Dash wants to make sure this never happens again with its new iPhone app that integrates with bar and restaurant payment systems. Once your credit card info is inside Dash and you are at a Dash-equipped location, you don’t have to give your credit card up and you can pay your tab without getting the bartender’s attention.

“We want to alleviate the pain points of going out,” Dash cofounder Jeff McGregor told VentureBeat.

While the obvious practicality of Dash’s app leans toward making the bar experience better, the app has another smart feature: splitting a restaurant or bar bill with friends, family, or colleagues. Inside the app, you can split the bill, rate locations that take Dash, and potentially get rewarded by locations for using Dash frequently.

The Dash app will go live in the Apple App Store in August, but the startup has already received a boost of confidence from the investment community with $700,000 in seed funding, which just closed this week. Investors include Members of the New York Angels, Caerus Ventures, and Brooklyn Incubator. 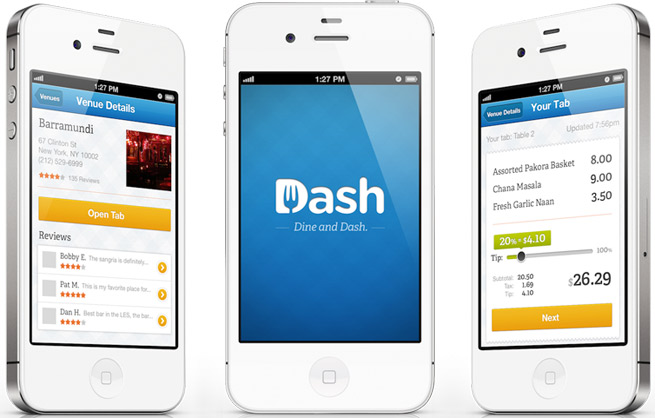 Dash is the brainchild of cofounders McGregor and Gennady Spirin (pictured above). McGregor says the two came up with the idea on New Year’s Day 2011. The two were eating lunch while a bit hungover and they couldn’t get the waiter’s attention. Naturally, they were frustrated.

“We wondered why we couldn’t just pay the bill with our phones,” McGregor said. “From there, we realized it needed to be a real thing.”

The two almost immediately set out to get a patent that covers mobile devices interacting with hospitality point-of-sale systems, for the means of “opening, viewing, splitting, and paying a tab,” McGregor said.

After getting the patent, McGregor and Spirin joined Prolific Interactive’s mobile accelerator in Brooklyn in January 2013 so they could focus on the app full-time. The founders finished up in June and now are ready to show the world what the app can do.

“Our focus has been on the user experience and making it as seamless as possible,” McGregor said.

Dash plans to expand to other U.S. cities in about six months. The next cities on the list are San Francisco, Los Angeles, Las Vegas, Chicago, Austin, and Miami. The company also plans to release an Android app before the end of the year.