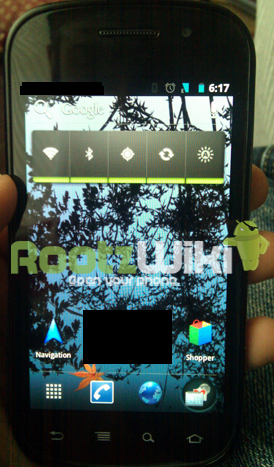 Google did not immediately respond with any confirmation of the photos’ authenticity.

Because Android is the number one smartphone OS in the world, with 43.4 percent of the smartphone market by market share, many people can’t wait to see what Google has in store with the next update of the OS. By contrast, Symbian is in a distant second place with 22.1 percent, while Apple’s iOS is in third with 18.2 percent.

The Ice Cream Sandwich leaks, which come courtesy of RootzWiki and Android Police, show an Android OS that hasn’t been modified significantly but offers several flourishes, like using a smooth blue color instead of green on notifications and icons.

Other gooey details include redesigns to the app launcher and app drawer, the addition of a panorama mode to the camera software, and a touch-up to Gmail’s theme. The new Android version will also launch with a Google Shopper app that can take advantage of near-field communication (NFC) abilities.

At this time, we don’t know when Ice Cream Sandwich will be unwrapped. One rumor suggests it will be out later this year and released first on the powerful “Nexus Prime” phone by Samsung.

Are you excited for the launch of Ice Cream Sandwich?