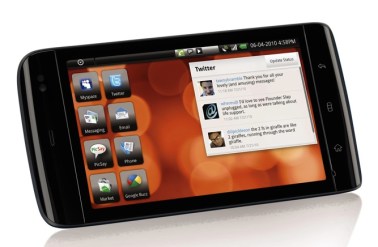 Apple’s iPad tablet may be a popular consumer device, but it will ultimately fail in the enterprise world, said Andy Lark, Dell’s global head of marketing for large enterprises in a story published by Australian CIO magazine yesterday. Dell on the other hand will ultimately win because of the company’s enterprise approach, he said.

“I couldn’t be happier that Apple has created a market and built up enthusiasm, but longer term, open, capable and affordable will win, not closed, high price and proprietary”, Lark said in the interview.

Lark’s optimism seems a bit misplaced. Market research firm Forrester predicts iPad will dominate at least for the year 2011. And Dell’s current tablet offerings leave quite a bit to be desired. Its Android-based Streak tablet (pictured), which comes with either a 5-inch or 7-inch display, is designed for the business user, but so far the reviews have not been good.

Lark seems to see pricing as a key reason his company’s tablets can compete with the iPad. While the iPad’s pricing may seem very aggressive compared to the competition, he says that’s not entirely the case. “An iPad with a keyboard, a mouse and a case [means] you’ll be at $1500 or $1600; that’s double [the cost of the iPad],” he said in the interview.

I’m not sure Lark’s on track there. It’s true that the Streak does cost less than the iPad (by about $50), but, even if enterprise users wanted a mouse and keyboard with their tablets, they’d have to pay extra for them with the Streak, too. There’s no mouse available for the iPad, but you can connect any Bluetooth keyboard to it.

Beyond pricing, Lark does make a viable point: the Android operating system is more open than the iPad’s iOS, and when you’re in an enterprise environment and need to integrate with a variety of enterprise systems, Android could quickly gain the advantage.

“Apple is great if you’ve got a lot of money and live on an island. It’s not so great if you have to exist in a diverse, open, connected enterprise; simple things become quite complex,” he said.

Integrating the iPad to enterprise systems could be complicated. At least if you build your systems in the traditional way with locally installed applications. In that case the need for Apple’s approval to install applications to the iPad via App Store will be impractical.

But that argument misses the fact that IT is increasingly becoming consumerized. According to Forrester Research 84% of enterprises are increasing the use of more consumer-style Web applications that can be used on an iPad or any other tablet. The same study also reveals that 26% of companies with 1,000 employees or more plan to implement or have implemented general purpose touchscreen tablets such as the Apple iPad.