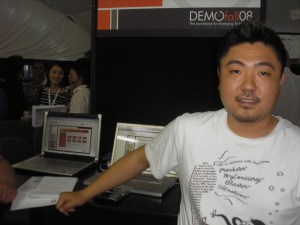 Mountain View, Calif.-based Arsenal Interactive has an interesting offering dubbed HeyCosmo, a suite of services that includes Concierge Blast. If you’re traveling, it will find the nearest restaurants of a certain type such as vegetarian. It will list all of the numbers. Then you can instruct it to ask if the restaurants have an opening for a party of five at 6 pm. The service will then call every single one of those restaurants. You can send a text question and the service will convert it into an automated voice.

Every time I hear the pitch from James Im, the chief executive of Arsenal Interactive, it makes a little more sense. A personable guy, he shouted my name and shook my hand heartily. Then he got me to pose for a couple of pictures with him and his team. That doesn’t change the fact that it’s really a bizarre service he offers.

The problem with this is that some hosts will hang up when they hear an automated message. Kim says that the restaurants will get used to the calls over time and they will likely jump at the chance to book reservations. You can use the Concierge Blast on your friends too. You can ask a group of friends if they want to hit Las Vegas this weekend. They can all vote and volunteer to pay for a piece of the trip.

You can use it on Concierge Blast on Facebook or other sites. Rivals include SpinVox, Chacha, Kadoink and Ribbit, which was recently purchased by British Telecom. Like Ribbit, Arsenal Interactive has built a “soft switch” in the background. This is the part that makes the most business sense. The company is able to make a 100 automated calls on your behalf because those phone calls are virtually free voice-over-Internet-protocol (VoIP) calls.

Im said that the company can make money off advertising. The ads are context-aware verbal messages played just as a user is deciding whether to eat sushi or Mexican. The company was founded early last year and raised a bridge loan to get off the ground. Im said he may seek a first round of capital early next year. It has seed funding of $650,000 from private investors.

I wonder if anyone really needs this unless their job is to be the social director of a big roving posse. But Im said that the company is already generating $100,000 a month in ad revenues and it is generating millions of messages a month. It is now in an open beta test. The company has 14 employees.
http://services.brightcove.com/services/viewer/federated_f8/980795693